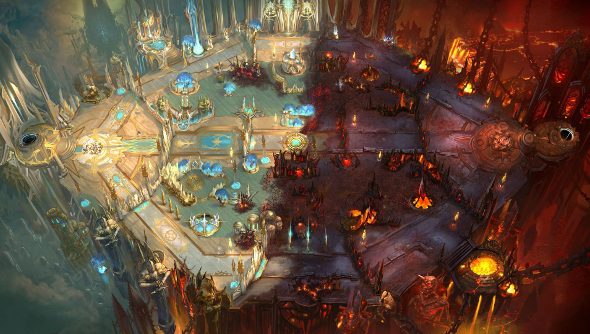 Diablo’s war between Heaven and Hell, its Eternal Conflict, has spread all the way to Heroes of the Storm, where space marines, dwarfs, demons and the occasional panda are now fighting either for the shiny angels or the grotesque hellspawn. It’s a grand old time!

Nick and I have been messing around in the Nexus since the update launched, getting to know the latest hero, the charming Butcher, and killing our way through the Battlefield of Eternity. We’ve saved up our thoughts just for you, so point your squishy orbs of sight below.

Fraser: Nick! We’ve not been at our best since the update launched, and I blame you entirely for all of our defeats. But instead of regaling people with our tales of woe, let’s talk about more important things, like treasure goblins and FREE GOLD.

Nick: I love free gold. Diablo’s mischievous treasure goblins have invaded the Nexus, giving every player a lovely little bounty of gold each day. Before the match starts the little devil will run rampant through your base, until you either slay it, or it hops back through the portal from whence it came. If you manage to skew the little imp, you’re whole team is given 100 gold. You can repeat this once a day during the new map celebratory goodness. 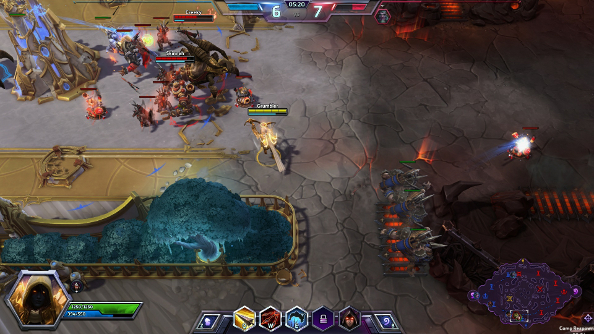 Fraser: Yeah, it’s temporary, sadly, but little touches like the treasure goblin really make this feel like an event, which it is, rather than just an average update. It’s a big deal, a properly themed update, where the map is inspired by one of Blizzard’s games rather than just a giant garden or a mine.

Speaking of the map! It’s a bit of a special one, isn’t it? Not just because of the Diablo theme, but because there’s a bloody war raging, with two giant idiots smacking each other stupid right at the heart of the battlefield. We’ve lost the matches we played together on it (again, your fault), but separating yourself from your failures for just a moment, what do you think of the map itself?

Nick: It’s awesome –in fact it may be too awesome. See, because Battlefield of Eternity is actually the first Heroes of the Storm map to be based on one of their massive franchises, it’s much more memorable and epic to be a part of. It’s pretty clear that Blizzard also feel the same way, as they’ve put a lot more effort into this one. The map has its own unique mercenaries, not just themed variations, but full blown new ideas.

One is a demon dog summoning warlock, who if left to his own devices, will just endlessly resummon his hellish dogs until he’s dealt with. The other is a pack of goatmen spear-throwers, who excel at demolishing your fortifications with the safety of their long range.

But the mercenaries aren’t the only new addition, though. 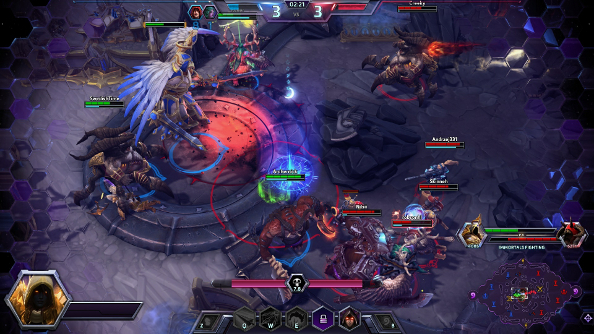 Fraser:Nope. Like all maps, the Battlefield of Eternity comes with its own unique objective, a mechanic that will assist you in your primary goal: the complete destruction of the enemy’s core. It’s the flashiest one, undoubtedly. Here’s the deal: right at the centre of the map, two titanic warriors duke it out, one representing Hell, the other fighting for Heaven, and the heroes have to beat the shit out of them.

If your team’s on the Hell side, you’ve got to smack around the big old angel, but if you’re on the side of angels, then you’ll need to beat up the giant, stinking demon. The goal is to defeat your target before the enemy knocks theirs out of commission. If you do that, then your angel or demon will leap to a random lane and start pushing with all his might. He’ll be at full health when he starts, regardless of how much damage the other team did to him, which instead affects his shield.

What makes things a wee bit tricky is that both teams will be fighting in the same tiny area, inspiring lots of bloody team fights. You can focus on just hammering the angel or demon, but they move mid-battle, forcing the teams to cross each other, pretty much forcing them to get into a nasty scrap. There’s a lot going on.

Nick: Yeah, bloody fights are almost a certainty. During their gladiatorial clash, they’ll shift around the middle to new positions, forcing each team to do the same if they want to continue the assault. This normally leads to a quick skirmish between both teams, and the victor of the teamfight will almost certainly gain the upperhand with their immortal.

Like all objectives, there’s also reason to try and take advantage of the enemies attention to grab mercenaries and also siege some forts. I noticed that this was more feasible during the early game, but as death timers start to become more and more punishing, the immortals become so powerful that they simply cannot be ignored. 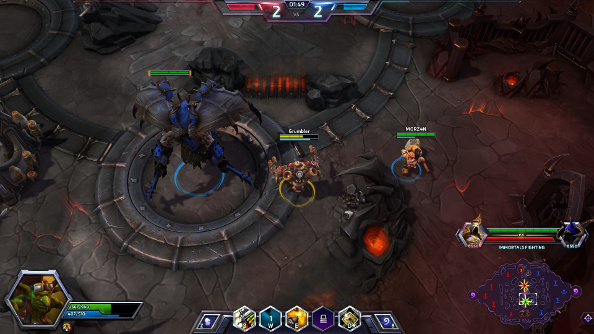 Fraser: There were plenty of times, smack bang in the middle of battle, when I wish I had the time to take a step back and appreciate the scene. Battlefield of Eternity is a striking warzone, split between the sparkling, fancy border of Heaven and the grotty Hellscape on the other side. It’s at its most striking when the angel and demon collide, though, smashing into each other, weapons raised, flying above the squabbling heroes.

Nick: Its visuals aren’t all that deserve attention. The music that wraps Battlefield of Eternity up in a nice bow is just breathtaking. Here – give it a listen:

The OST is on par with just about anything that’s come from Diablo in the past. It starts out with that goosebump inducing Tristram theme, before moulding itself around the classic Heroes of the Storm riff. I could listen to this all day; if I could buy it seperately, I would.

Fraser: You can’t buy the music, but Blizzard is selling something new: The Butcher. He’s the first of three new Diablo heroes, and he’s thoroughly horrible. I’ve killed him in Diablo III many times, which didn’t give me much confidence in his abilities. But it turns out that he’s quite good!

Since I’m a bit cheap, there’s not much hope of me throwing the 7 or 8 quid required at The Butcher, but I might splash out on him with some in-game gold. So far, though, I’ve only played as him in an AI match, but my interest is piqued. He’s an assassin, all roots and stuns, with a high damage output, and the more he kills, the stronger he gets.

Nick, you picked him up –what do you reckon? Are you a fan? 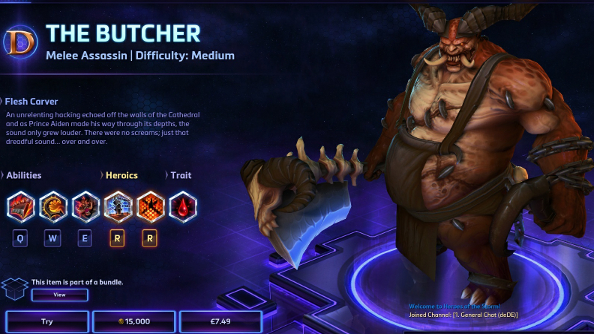 Nick: The Butcher is quite the menace. You learn quickly that just because he’s some hulking monstrosity, it doesn’t mean he can take a lot of punishment. I would sometimes charge into a fight and be bursted down before I could do any real damage. And that’s the worst fate to befall a Butcher player, as you lose all of your stacks of blood, which as Fraser said, boosts your damage considerably.

But then I learned to pick and choose my fights carefully, and man he doesn’t half hit hard. It’s important to lane him during the early game, killing minions and gorging on that precious blood. When you’ve reached max stacks, your damage is considerably higher –easily to the point where you can kill a squishy support in just a couple of swings. As The Butcher, you’ll want to roam. Go into a lane, wait in the safety of the smoke/brush, and then come charging out and surprise your unlucky foe.

His ultimates are hilarious too. Furnace Blast harkens back to his appearance in Diablo III, where his lair was littered with fiery grates. After a three second delay, the ground around him will erupt with fire, dealing huge damage to any enemy caught within it. You can also activate it mid-charge too, which lets you time it perfectly with your unstoppable stun. His other ultimate is Lamb to the Slaughter. It chains the nearest enemy hero to a hitching post, preventing them from moving out of a tiny area. I’ve not really used it that much, but I can see great potential when combined with other AoE heroes; the level 20 upgrade even lets you shackle an entire enemy team. Ouch.

Pair him up with another bursty assassin, like Zeratul or Nova, and you can start racking up the kills. It’s lovely.

Fraser: I found myself a bit too busy to play a lot of Heroes of the Storm in June, but so far, Eternal Conflict has been able to steal back my attention. And there are still two more heroes and another map to come. But what’s most exciting, I think, is the implication that more themed updates will appear. A StarCraft map is something I crave particularly.

So! It’s great. If you’ve bounced off Heroes of the Storm, it’s something that should reel you right back in. I’m hooked all over again and will have to adjust my sleep patterns accordingly.