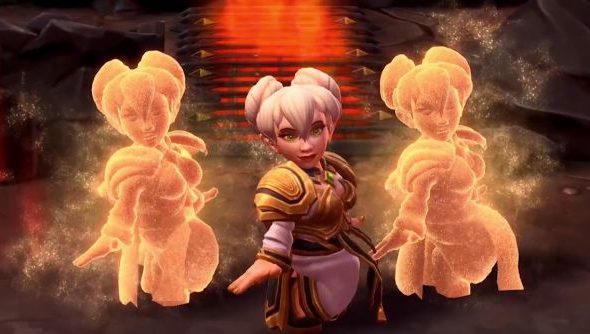 After the big information blowout last week, Heroes of the Storm’s next patch is now on the PTR with the addition of Dragon-Gnome Chromie as well as a wealth of other changes to set up the massive alterations coming down the pipe for season one. This go round they’re updating how matchmaking works to make things more enjoyable for higher level players, as well as the usual large balance and bug fix pass.

Try the best Heroes of the Storm heroes before even more are added.

Chromie’s addition to the PTR means the bronze dragon time-defender (Blizzard!) gets her very own spotlight video, introducing her abilities:

As far as massively powerful ultimate abilities go, hers seem rather tame, but there’s no telling what getting them a level early will do. Equally, manipulating enemy positions to that magnitude is always deceptively useful.

As for the rest of the cast, they’re getting new skins, balance and bug fixes aplenty. Most notably, certain talents have had ‘rewards’ added to them, giving you a power spike when you use their affect enough times. In the case of the regen-orb collection ones, it’s bonus health and mana, while others get an additional active ability.

On the hero side, it’s the Warriors seeing the most changes, including Arthas getting a huge rework. Blizzard say that he was lagging behind in power and design, as one of the first that was added to the game, and had been on their radar for a while. He’s better now, with all sorts of new, powerful options across his abilities, and improved based stats.

The full, massive notes are available on the official site. This isn’t the final edition, but will bare a striking resemblance once a few more balance and bug tweaks are made. They’ll be followed up later down the line with the huge Medivh patch, starting season one and rebooting the ranked system.