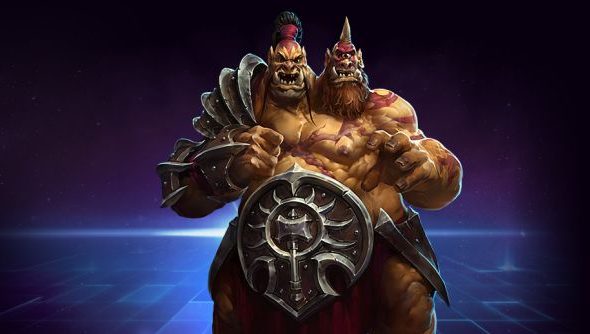 The Heroes of the Storm team had a lot of things to say at Blizzcon about what was coming soon for the game, including a new battleground, Cho’gall the two-headed, two-player ogre and a bunch more. The majority of that is popping up in the game soon as part of a patch that will be going live over the next day in various regions. It also includes the long-promised changes to the way health and damage scaling works, meaning getting ahead in the early game is less of an auto-win scenario.

Wanting to get started with Heroes of the Storm? Here’s the best heroes for beginners.

Cho’gall has a spotlight of his very own now:

He’s a fascinating concept, and the only thing better than his two-headed design is the viral nature by which he’s being distributed. Everyone who attended Blizzcon is being given access to Cho’gall automatically, and others will get it when they’ve won two games playing as the other half of someone that’s already got it. Those original players will also get a nice chunk of in-game gold for doing so. Victory for everyone, and a nice viral distribution pattern that will probably yield some interesting stats for Blizzard.

The rest of the patch is detailed on the official site. It includes various balance changes to heroes, some visual tweaks to make abilities and skins look nicer or clearer and numerous bug fixes. In the coming weeks we should also get to see the rest of what Blizzard’s working on, as detailed in this In Development video.