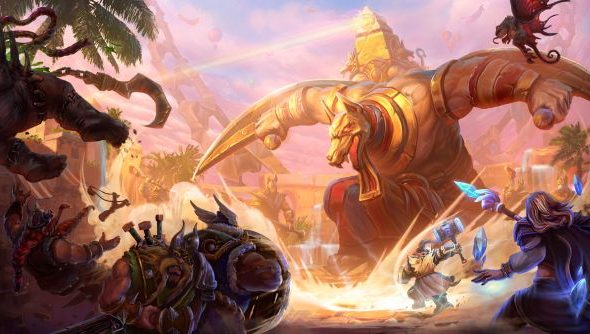 Not so long ago Blizzard’s MOBA was in ‘technical alpha’, which made it sound a very long way off indeed. But now we have a Heroes of the Storm release date, and it’s June 2nd, which is close enough to start preparing for.

Here’s one way you might ready yourself for a plunge into the Nexus, that great marble cake of clashing universes: with five heroes, a skin and a mount for £14.99.

The Heroes of the Storm starter pack will only be found at retail – read: actual, physical shops you have to go out and step foot in – and only after launch.

But the key draw is five characters, namely Zagara, Sonya, Li Li, Jaina and Zeratul, at a considerable discount. Zeratul’s Ronin skin is also included, alongside the Golden Tiger – a mount not available for purchase on the game’s store.

Sensibly, Blizzard will issue each of the pack’s heroes and skins as separate codes, so you can hand off any you have already to friends.

The very important thing to note, though, is that Heroes of the Storm is a free game – and heroes can be picked up using the gold earned playing matches. The starter pack is just that – a 15 quid shove across the line as the whistle blows.

Did any of your follow Blizzard’s recent MOBA tournament, Heroes of the Dorm?