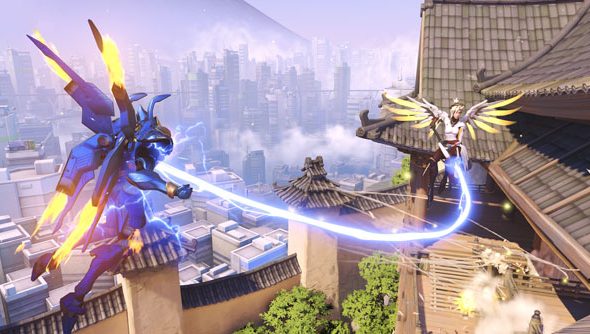 The Nexus is expanding. One day we’ll all be enveloped by Blizzard’s multiverse, given spiky shoulderpads and forced to fight for XP along the lanes. But it begins at the end of this month with Eternal Conflict – a bumper pack of Diablo III-themed heroes and a heaven-and-hell battleground.

Nothing in Blizzard’s back catalogue is off-limits. Give them time, and the Heroes of the Storm team will even get to Overwatch.

Looking beyond the Butcher, Leoric and the Battlefield of Eternity, Blizzard are looking to create more “strong thematic pushes” for the other universes in their stable. And that will include the vibrant team-shooter they announced at BlizzCon.

“Everything is a viable option,” senior Blizzard artist Phill Gonzales told PCGamesN – with the caveat that the company’s other teams deserve time to introduce their own heroes first.

“Even Diablo was a little tricky, because Diablo III wasn’t out yet so we couldn’t reveal that appearance,” he said. “We did the D2 version and everyone’s asked since, ‘Where’s the Leah Diablo?’, and we were like, ‘We’ll get to it’.

“But when we were making it originally, it was kind of like the Overwatch situation – we can’t spring their surprise before they get to do it.”

The wait may be hard – but Heroes of the Storm is fuelled by fan service, and there’s no telling yet which elements of Overwatch’s colourful cast players will cling to.

“People need to have a sense of attachment and perspective on Overwatch, something they can anticipate,” said Gonzales. “We want to make sure [that team] gets their opportunity to be their own game and create their own experiences, and then we’ll start bringing those characters over.”

Which Blizzard characters would you consider to be MOBA-ready?