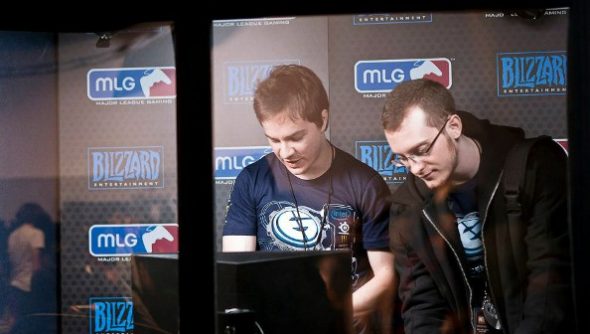 Well here’s a surprise. It’s been awhile since we heard from Greg “IdrA” Fields, at one point one of the foremost American StarCraft pros. He was released from the Evil Geniuses eSports team in the wake of some extremely negative comments about the StarCraft community, and appeared to have dropped out of the competitive gaming entirely.

Now, however, he has returned home to EG… as a part of their newly-signed Heroes of the Storm squad.

IdrA was one of the most temperamental StarCraft players, both in the game and outside of it. He was routinely in hot water for his outspoken comments and combative personality, and he also developed a reputation for rash decision making and self-destructive pessimism (go ahead and Google “idra early gg” and see what comes up).

His biggest problem, however, may have been that he didn’t actually like the game or his role in it. Like a lot of pros, he adored Brood War and never really warmed up to StarCraft 2, and that distaste colored his entire career. It didn’t help that in North America’s personality-driven eSports scene, IdrA slowly turned into a caricature of himself.

So it’s a bit of a surprise to see IdrA come back to competitive gaming, and to a team with which he had such a public split. But as Evil Geniuses explain in a recent blog post, IdrA and Evil Geniuses had a deep relationship, and even when they let him go, it was without much animosity on either side.

When they started looking to form an Evil Geniuses Heroes of the Storm team, however, they found themselves considering IdrA once again.

“When we initially decided to get into Heroes of the Storm, Greg’s team wasn’t the only one we scouted,” reads the announcement. “Especially considering how his last run with our team ended, we were cautious and we wanted to be thorough, so we interviewed and researched a number of different prospective HotS squads. Greg handled the role of negotiating on behalf of his teammates, and after a couple of conversations, we could tell that something was different.”

IdrA returns to EG as the captain of a five-player Heroes of the Storm Squad, including Jake “LzGaMeR” Winstead, another EG SC2 alum, and John “Chillatech” Peacock, Guillaume “Keylax” Ouellet, and Kayla “Faye” Murray.

It will be interesting to see how this experiment unfolds, both for IdrA and competitive Heroes. Heroes’ future as a competitive game is by no means assured, due to the crowded MOBA genre. It’s also an open question as to whether IdrA can make it work this time. The toll of competition and its attendant frustrations, plus the role he played with his online persona, proved to be toxic for him in the long run. After almost two years’ hiatus, he might be in a better place and ready to succeed once again as a progamer. But only time will tell if he can stand up to the pressure of competitive play once over the long-term.

His first test will come at BlizzCon next week during the Heroes of the Storm exhibition tournament, where the EG team will take on Cloud9, Fnatic, and Team Liquid.