Among Heroes of the Dorm’s other issues, one huge problem that afflicted it this past weekend was the fact that a large portion of its international audience couldn’t actually tune-in to watch it.

That’s because ESPN3, despite being an online streaming service, isn’t available to a lot of online viewers due to the subscription fees ESPN charges. That left Heroes fans, particularly in Canada, out of luck even as some of their own teams were competing in Heroes of the Dorm.

All for the sake of four letters: ESPN.

Esports live online. Always have and, the way things are going, maybe they always will.

That’s not a bad thing by any means. One of the reasons that eSports are finally exploding in popularity is because, thanks to Twitch and other streaming services, the audience can finally enjoy the games with comfort, convenience, and quality. Nobody has to go blind trying watching choppy 240 pixel video on dial-up anymore. You just open your browser and enjoy the broadcast.

The idea of getting eSports on television was a lot more important before streaming video came into its own. Being able to turn on your TV and see a high-quality broadcast of Counter-Strike or StarCraft could have solved a lot of the accessibility and quality problems that eSports used to have. But those problems have been solved, so what can cable and network TV broadcasts do for eSports at this point?

The illusion of legitimacy, and very little else.

Esports, a bit like the games industry, can have a bit of an inferiority complex at times. They constantly have to prove what Big Business they are (I have an email inbox full of boring — and statistically dubious — PR pitches about viewership to prove it). The lure of TV, and the attendant ad money from rich, non-endemic companies, is strong. If eSports were on TV, they could be woven into the fabric of life the way traditional sports have been. They could finally be “real” sports. 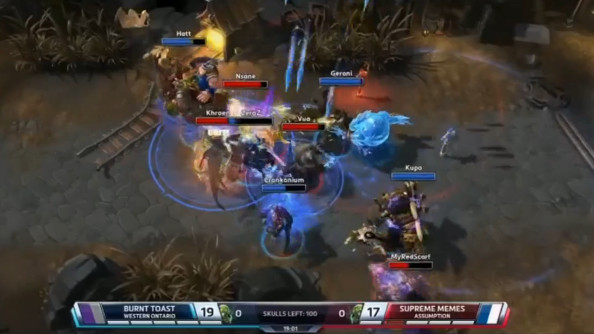 But this is putting the cart before the horse. TV helps sustain the health of traditional sports, but the grassroots interest and the organized leagues preceded television. Mainstream acceptance, lucrative TV rights, high-value advertisers… all of that comes after you build up eSports. And that’s something that’s going to happen naturally, with time.

But not if you piss off that audience by forcing them to jump through hoops to watch the game they care about. And that’s what happened when Heroes of the Dorm became exclusive to ESPN3.

Esports should be aiming higher than what collegiate softball and pro bass fishing have attained, anyway. They are the dominant events on livestreaming services around the world, and those have a good chance of being one of the dominant mass media of the next couple decades. Nobody knows what the future of cable looks like, but right now, the traditional mass-media culture looks like it’s vanishing. Esports organizers should worry less about the appearance of mainstream relevance and more about building and improving a healthy competitive infrastructure and developing a loyal audience.

Fortunately, most of them do. Heroes of the Dorm needs to study their example before it can graduate to being a genuine, premiere eSports event.