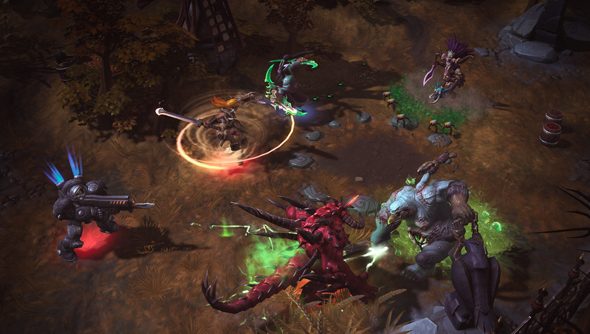 Forensic news teams digging through the aftermath of an explosive BlizzCon 2014 have discovered that Heroes of the Storm put in quite a respectable showing. Blizzard announced a Hearthstone-style ranked mode for their first MOBA, and a Heroes of the Storm beta penciled in for January.

The beta will open with two new battlegrounds – and a third is on the way. You’ll find there’s a familiar orange-black tinge to it – or should that be singe? 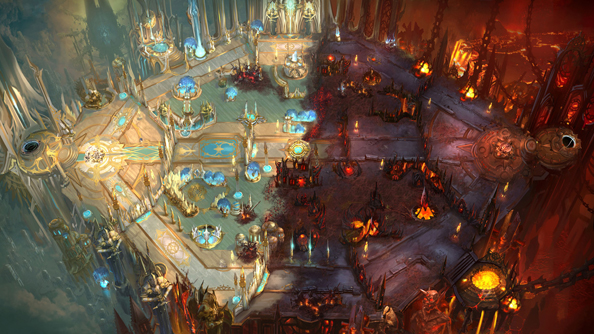 The Diablo-themed map is little more than concept art right now. But the battleground pits the legions of the High Heavens against the Burning Hells’ chattering demonkind, and it’s clear that dichotomy manifests itself on the map.

My reading of the art is that the flames of hell will spread or be quenched according to the relative success of each team – but Blizzard haven’t confirmed that yet.

“We know a lot of players have also been eager to see us bring worlds from classic Blizzard games to the Nexus,” said Blizzard. “We’ll make sure to keep you informed as development continues on these Battlegrounds and more, so stay tuned.”

The other two maps are Sky Temple, a floating city dotted with aqueducts and oases inspired by ancient Egypt, and Tomb of the Spider Queen – the game’s first interior battleground, and still very much under construction.

Did you manage to squeeze your way into the Heroes of the Storm technical alpha? Tim and Nick called it a “triumph”, don’tcha know.