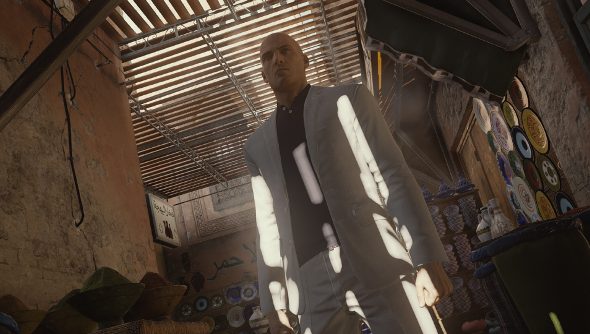 Episode three of the surprisingly excellent Hitman will be going live in just under a week on May 31. In it, Agent 47 heads off to Marrakesh, Morroco, where social unrest masks your attempts to kill an investment banker and an army general. It also has the usual range of challenges and opportunities to keep you occupied.

More in this genre over in our list of the best sandbox games.

The mission bears the name ‘A Gilded Cage’ and sends you after Claus Strandberg, the money-moving private banker, and Reza Zayden, who prefers the military side of things. There’s a coup just about to erupt in the country on the brink of civil war, giving some context to your actions.

It won’t all be bustling side streets, with parts of the action taking place above the city on its dusty rooftops, or in a nearby Swedish consolate – presumably where the banker has hid as the country collapses around him. It will also serve as a future location for the popular elusive targets, which premiered last week with the next hitting on Friday.

Three more episodes are to come, set in Thailand and the United States, with the finaléeast-bound for Japan. Episodes are $9.99 / £6.99 each, or you can grab the lot for $59.99 / £49.99on Steam. Matt’s had a sneak-peek at Episode 3 himself, and will bring you his impressions tomorrow.