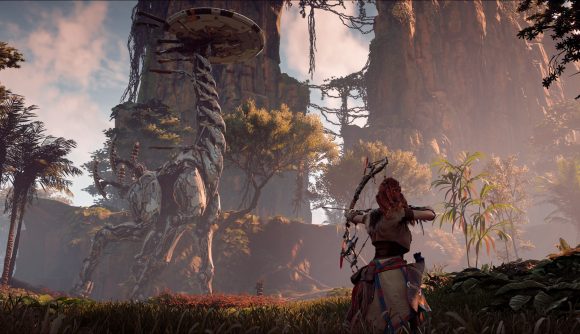 After three years of Playstation exclusivity, Horizon Zero Dawn is close to touching down on PC. It won’t officially launch until later this week, but we do have some Horizon Zero Dawn reviews to help us decide if we’re going to pick it up. Some of you may have never played it, whereas others might fancy seeing how much has it has changed now it’s on PC.

So far it’s looking pretty good over on Metacritic. The reviews aggregator site has tallied up 19 HZD reviews and found the score to average out at 87. It’s pretty much the same story on OpenCritic, too, as they have it at 86 based on eight reviews.

We were quite fond of it ourselves but had one or two issues, so we gave it a seven. In her Horizon Zero Dawn PC review, Malindy calls it “a very workmanlike open-world game”. She also says it’s “great to look at, competent overall, and charming when it tries something new, but formulaic when it doesn’t – which is most of the time”.

Without further ado, here are the scores from the Horizon Zero Dawn PC reviews:

A pretty good spread of scores, we think. The Horizon Zero Dawn Steam release date isn’t quite here yet, so you won’t be able to buy it. Thankfully the Horizon Zero Dawn install size isn’t too daunting – so you won’t have to make heaps of space while you wait. In the meantime, though, you can check out our new PC games guide for something to fill your time.