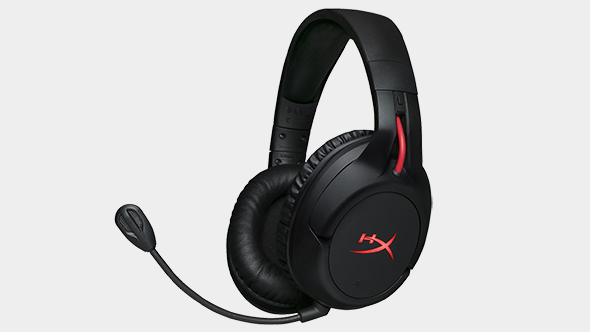 HyperX is new to the wireless headset game, yet its first entry into this new segment, the HyperX Cloud Flight, hasn’t been hindered by the company’s lack of experience. Battery life, comfort, and sound quality all come together with this mid-range wireless set. That’s why despite the tough competition within its price point, the Cloud Flight is definitely one for the potential purchase shortlist.

As a wireless headset, the Cloud Flight plays by a different set of rules to the HyperX Cloud Alpha. It makes its own mark in the mid-range wire-free gaming headset market against stiff competition from the likes of the Steelseries Arctis 7, Razer Threshers, and Logitech G933.

In the market for some untethered cans? Here are the best wireless headsets around.

Considering these cans could have easily been another run-of-the-mill 20Hz – 20,000Hz kit, it’s impressive to see HyperX tweak the standard formula for a much more enjoyable listening experience. As far as USB dongle wireless gaming headsets go, the sound reproduced by the 50mm neodymium drivers within the Cloud Flight is really rather impressive.

The bass packs a punch, and the audio is tonally distinct across the mids and highs – all without jarring distortion to muddy the entire soundscape. The headset also has a closed back design and that can create a slightly enveloping feel to the audio. However, open-backed wireless headphones are not always that easy to come by – or necessarily desirable – in the gaming peripheral market. 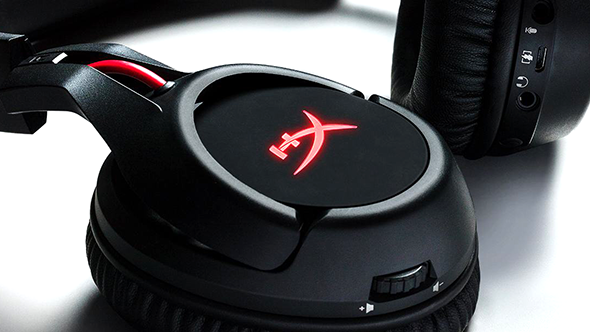 Audio quality in Overwatch was clear, and with clarity comes much-needed directionality in-game. The Cloud Flight doesn’t offer any 7.1 virtual surround – which I’m not too upset about personally – so that does mean distinct and clear audio is even more crucial to the gaming prowess of this headset. Luckily, the Cloud Flight succeeds here with flying colours.

You can always activate virtual surround sound functionality through third-party software if you absolutely can’t live without.

So, you can hear everyone else, but can they hear you? You’ll be glad to hear (ahem) the noise-cancelling microphone is plenty capable. It’s not great at blocking out the sound of a mechanical switch – few are – but it delivers clarity in the voice against even intense in-game noise. It’s detachable, flexible, and retains its position, but cannot be stowed away from your face without detaching and storing elsewhere – so you’ll have to do your best to keep track of it.

As for style, the Cloud Flight has a pretty familiar theme: red and black. Yippee. While the tame design is preferable to some of the more garish gaming headsets on the market, HyperX could’ve definitely added a little more finesse to the plastic finish to try and make the headset look and feel a little more high-quality. The design is certainly tough and durable, it can’t be faulted on construction quality, but I can’t imagine many customers settling on the Cloud Flight due to its ‘wow factor’.

HyperX have kept things to a minimum with the built-in controls, too. The left ear cup features power and chat mute controls, while the right comes with a volume control wheel. This wheel is pretty easy to nudge up or down, however. So at risk of your eardrums exploding, do check volume before unpausing.

There are also LEDs under the HyperX logo on both ear cups, which can be a huge drain on battery life – 13 hours with LEDs enabled, yet up to 30 hours when disabled. I feel very little would’ve been lost from the aesthetic if HyperX had cut them out entirely, but they can be disabled with two presses of the power button after startup. Every time… 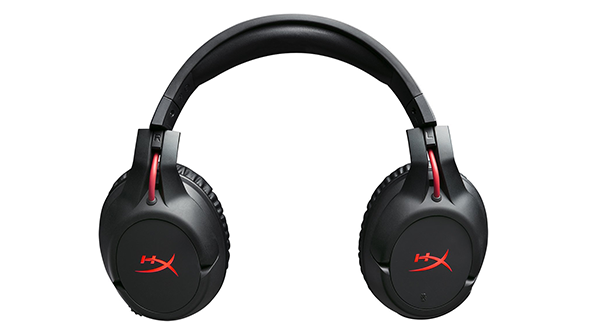 Regardless, the battery life is a key feature here and it makes a big difference in ease-of-use. It’s wonderful to put on a pair of wireless cans and not have to worry about battery life for at least the current gaming session, and likely a good few more as well. The Cloud Flight lasted days of heavy use without needing to be topped up during my time with it, and that alone could be a tipping factor between these headphones and a similar quality wireless pair.

The ergonomics are crucial if you intend on making the most of that 30-hour battery life, but luckily, ergonomics are something that HyperX do very well. There’s decent noise isolation from the memory-foam ear cups; the headset doesn’t clamp down on your jaw; and the Cloud Flight’s 300g of mass is evenly distributed across the headband. The ear cups also swivel 90° to allow them to lay flat when around your neck, which is especially convenient with an untethered headset such as the Cloud Flight when you take a quick break from the game. 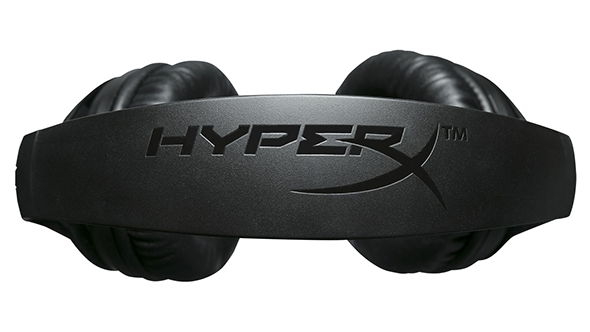 The Cloud Flight is not cheap, though. At $160 / £139, and despite the fantastic comfort, the design isn’t up to par with what you might expect from that price range. The SteelSeries Arctis 7 can be found slightly cheaper and has the Cloud Flight beat on almost every aspect of design, style, and even comfort – if only by a slightly smaller margin than the rest for the latter.

Realistically, I would like to give the HyperX Cloud Flight a score midway between two values. I hold HyperX to a high standard – the company built the Cloud Alpha, after all – but it seems HyperX is sleepwalking into the wireless market with the Cloud Flight, and I expected more of a showstopper. But I’m beholden to rules that deny me the right of indecisiveness, and so, I think the impressive sound quality and long-lasting battery life tips the scales in the Cloud Flight’s favour. In a way, I’ve just skirted the half point rule anyways – take that, powers that be.

While certainly worthy of consideration, HyperX hasn’t cracked the formula like it did with the HyperX Cloud Alpha – at least not yet, anyways. I’m looking forward to see HyperX does with its next iteration of wireless headset, I have a feeling it could be one to look out for.