The idea for Immortals Fenyx Rising came from a glitch in Assassin’s Creed Odyssey. While putting the game together, director Scott Phillips looked at the crew of his trireme and found a crowd of cyclopes staring back at him. The team soon fixed it as it didn’t make sense in Odyssey’s historically grounded world, but it led him to wonder what would happen if Assassin’s Creed fully embraced the fantastical elements of Greek mythology.

The result is Immortals Fenyx Rising. A scenic open-world game filled with Olympian gods, monsters, and an epic waiting to unfurl, due to launch later this week on the Ubisoft Store. The feeling of wanderlust you get from exploring the Greek islands is familiar from Odyssey, but here Ubisoft Quebec drinks freely from the well of Greek myth while offering gameplay that’s accessible to adults and kids alike.

Tonally, we’re in the ball park of Disney’s Hercules. There’s plenty of referential humour to the darker nature of Greek poems, but it’s balanced by sillier, light-hearted characters who could easily have been plucked from a cartoon. The narrative even attempts to impart moral lessons, too, such as embracing your faults. Ubisoft doesn’t quite capture the warmth of a Disney classic, or pull off the sly, mature humour we’ve come to expect from a Pixar production, but it does come close.

You find yourself in the sandals of the customisable hero Fenyx, a plucky shieldbearer in awe of the heroes and gods who feature in Greek fables. After awaking to find themselves shipwrecked on an island, they stumble out to find that their crew has turned to stone and their brother is missing. Their search for answers eventually brings them to Hermes, who tells us that a Titan called Typhon has cursed the gods and sealed away their power. If we want to bring our friends back, we’ll need to delve deeper into the Golden Isles and seek help from the gods, meaning we’ll need to help get their powers back. 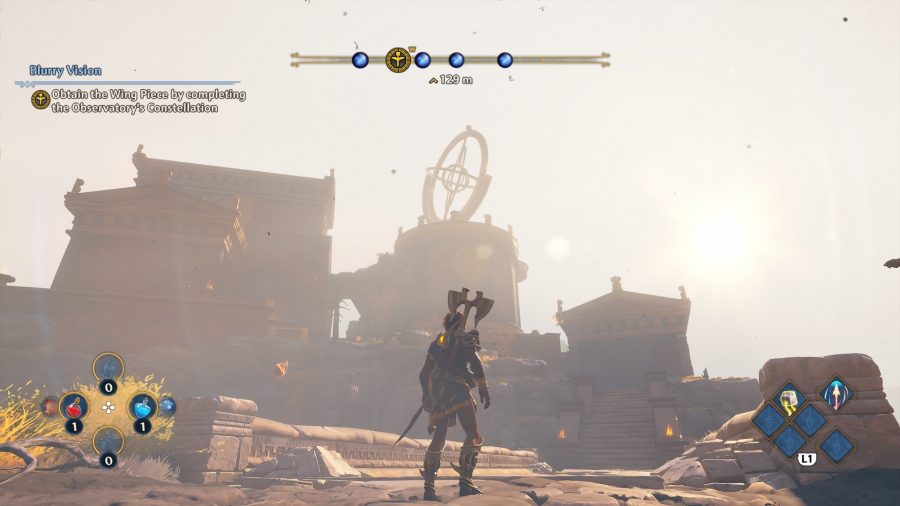 Fenyx is daunted by their quest as, in a nice twist on the usual formula, they’re more used to their brother playing the hero. In the finest traditions of Greek tragedy, then, Fenyx has a defining flaw: self-doubt. This theme neatly ties the narrative together, for as you journey to each region to help its patron god, you learn that even they have flaws, too. Your problem, though, is that while cursed, they don’t have to deal with them. The goddess of love, Aphrodite, is happy to live her life as a tree as she’s free from vanity and is now quite lovely, spending her time feeding fruit to the animals. It’s all to Hermes’ boredom, as he misses having someone who is willing to gossip about the other gods with him. To change her mind, you undertake a series of quests to convince her to embrace the parts of herself she doesn’t like, after which she’ll help you take on the game’s big baddie.

Accepting every part of yourself is the positive message at the heart of Immortals Fenyx Rising, but Ubisoft doesn’t let things get too serious. As you help Aphrodite, her father Zeus heckles narrator Prometheus with comments about difficult she can be. Your efforts to help Ares, the god of war; the goddess of, erm, also war, Athena; and god of the forge Hephaestus go the same way, with Zeus constantly jabbing at his fellow Olympians. It can make him seem callous at times, but Ubisoft eventually holds him to account for his behaviour.

The balance between humour and theming doesn’t always land. Hephaestus, for instance, has struggled throughout his life with rejection, isolation, and abandonment – at one point, even his father Zeus casts him out of Mount Olympus – in actual ancient Greek mythology Hera does this because Hephaestus has a limp, but Immortals just sort of… glazes over this with a mere passing gag. You convince him to make peace with his past, but that journey is undermined by some of the banter that follows between the gods. Zeus forced Aphrodite to marry Hephaestus after her true love Adonis was gored by a boar, meaning she resents her husband as he represents Zeus’s lack of regard for her feelings. Once Hephaestus is reunited with the other gods Aphrodite openly cheats on him with Ares. This is all true to the source material – Zeus was, comprehensively, a dick, and Aphrodite did have an affair with Ares – but Ubisoft misses the chance to exact any justice for Hephaestus and instead reduces him to the butt of cheap jokes, with him remarking at one point that he’s going to tell his therapist. In a story that’s explicitly about reinventing Greek myth with a positive moral lesson, it’s an awkward face-palm of a moment. 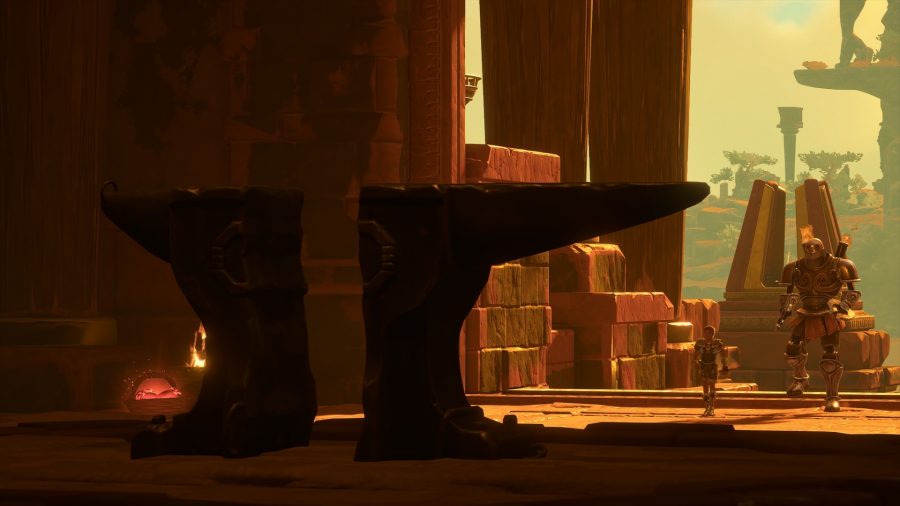 In its better moments, though, the dual narration from Prometheus and Zeus can prove refreshingly educational. During one of my quests to help Aphrodite overcome her past, I’m sent out to find the tears she shed when Adonis died, which have become crystallised. It takes me to a village where women celebrate a festival called Adonia that involves mourning Adonis by growing a cabbage on the roof of your house. The quest simply involves nicking said cabbage and putting it on a pressured plate, but the real treat is that this festival really happened in ancient Greece. Listening to the narrators chat about obscure snippets of ancient Greek mythology and history while thieving cabbages is a delightful way to learn a little more about the world these myths belonged to.

Exploring the Golden Isles is one of Immortals Fenyx Rising’s more consistent wonders. Aside from Mount Olympus, you’re free to roam the isles as you please, whereupon you’ll notice how each section of the map reflects its patron god. Reflecting her status as goddess of beauty, Aphrodite’s realm is brightly lit, and filled with rolling hills, blooming flowers, and rivers that glow with pastel tones of green, pink, and blue. It offers a stark contrast to the destroyed towns and monuments I stumble across in Ares’ land, a hellish, war-torn locale that’s dimly lit with streaks of yellow breaking through the predominantly brown palette. I spend a lot of time simply gliding around with my wings, taking in the varied scenery below. 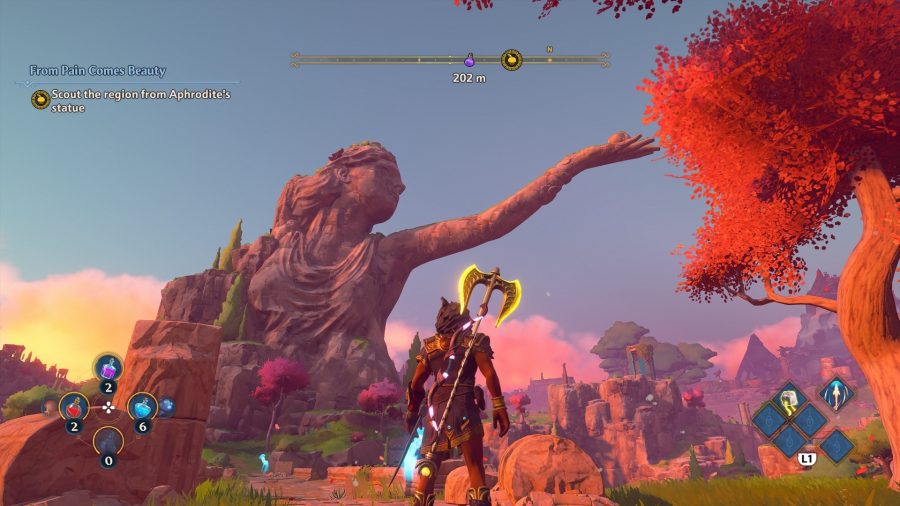 The freedom to explore is also encouraged through the main campaign. Uniting the gods against Typhon will take you to every corner of the map, though the order in which you tackle them is up to you. Many of Immortals’ puzzles come in dungeons called Vaults of Tartarus. You’ll need to complete a fair few of these to progress the story, but they’re not all tied to the campaign, and you’ll find a few more memorable vaults dotted around that offer different rewards such as Zeus’ lightning, which can be traded in for more stamina. The type of challenge they pose differs depending on the area you’re in. Sometimes you’ll need to finesse your timing to fire an arrow through an obstacle course, other times you’ll need to rearrange blocks to help you guide a boulder from one point to the other. I didn’t find the challenges to be exceedingly complex, but they were still engaging and satisfying.

If you’ve played Ubisoft open-world games before, then the combat will feel pretty familiar in that its fundamentals are solid if underwhelming, with the real fun only beginning when you power yourself up. You’re given a sword for basic attacks, a hammer that can stagger foes, and a bow for ranged combat. Dodging enemies slows down time, giving you a handy window of opportunity for dishing out additional damage. The mix of cartoony action and powerful abilities do make for a good time. While enemies didn’t feel too tough to beat, there’s just enough variety to keep you occupied, with flying and shielded archetypes requiring a different approach before you can rough ’em up.

The Golden Isles, as we’ve come to expect from Ubisoft open-world games, are packed with things to see and do. Past the main story and side quests, there are lots of bosses, environmental puzzles, and challenges for me to pursue in exchange for various rewards. These can be anything from the ambrosia you need to grow your health bar to some Coins of Charon, with which you can buy abilities. If you’re after some tranquillity, then there are moments of solace to be had journeying out to collect herbs for potions. 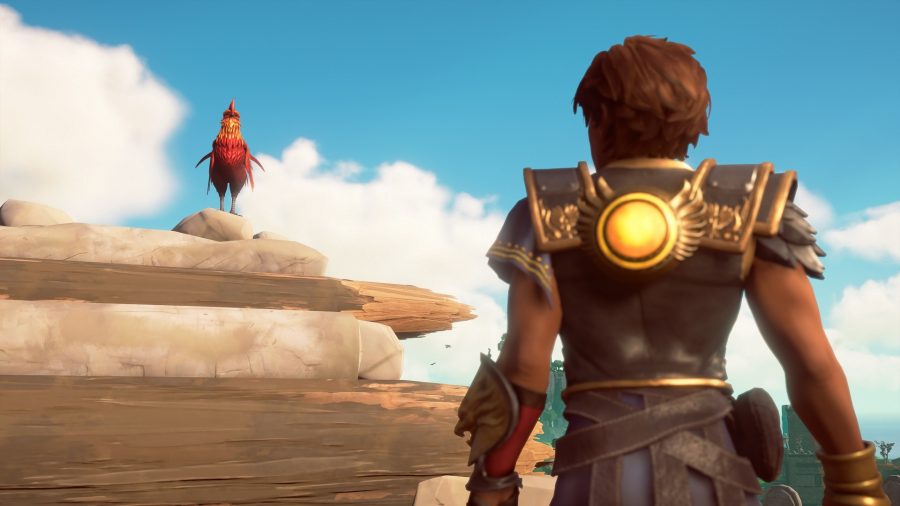 Is Immortals Fenyx Rising like The Legend of Zelda: The Breath of the Wild? Yeah, a little bit. You have your physics-based puzzles, a sprawling, natural open world, horses to tame, and a stamina bar that depletes as you run or climb a mountain. The combat and puzzles are a tad easier, and with none of the physics-based freedom that made Breath of the Wild so special. If you’re going to take inspiration from lighthearted open-world games, though, it doesn’t hurt to take notes from one of the best.

More like this: Here are the best fantasy games on PC

Immortals’ range of difficulty settings makes it quite adaptable, too. The game comes with your basic options of easy, normal, hard, and so on, but you can also tune how the game guides you through puzzles. As with modern Assassin’s Creeds, if you fancy the challenge of battle but don’t enjoy figuring out puzzles – or vice versa – you can easily tweak the settings to your preference.

Immortals Fenyx Rising’s biggest success, then, is its flexibility. You’re free to tackle the game at your own pace and at a difficulty with which you feel comfortable. Like any good animated movie, there’s humour and joy to be found for adults or children. The story doesn’t always keep its hooks in you, and sometimes undermines its positive moral lesson with acts of gross tone-deafness. That aside, there are some great characters among the Olympians and Ubisoft does an excellent job of building empathy for them so you’re keen to stick around for what happens next.

Ubisoft's latest open-world is a constant delight to explore, even if its story sometimes struggles to juggle its humour and its thematic goals.

7
Spin Master Games Santorini Strategy Based Family Board Game for Kids & Adults, Ages 8+, Up to 6 Players