What are the best god games on PC? Whether you’re a beneficent deity, carefully managing a virtual world so that everyone can live in comfort and harmony, or an agent of chaos who has gone mad with power ever since deleting the pool ladder in The Sims 2, god games are a great way to flex your management games muscles on a cosmic scale.

The traditional god game typically charges you with supervising some hapless humans, who you can’t directly control, but will benefit from your benevolent oversight. You might even be able to level up your godly powers as your people worship you – let’s face it, gods are total narcissists. Although, is it narcissism if you actually are a god? Regardless, as the recipient of those all-powerful thoughts and prayers, you’ve got a duty to reward the faithful, and punish the heretics who question your power. Verily, god will smite the head of their enemies, or something along those lines.

There’s nothing quite like exerting total and complete control over helpless little creatures, so without further ado, here are the best god games on PC. 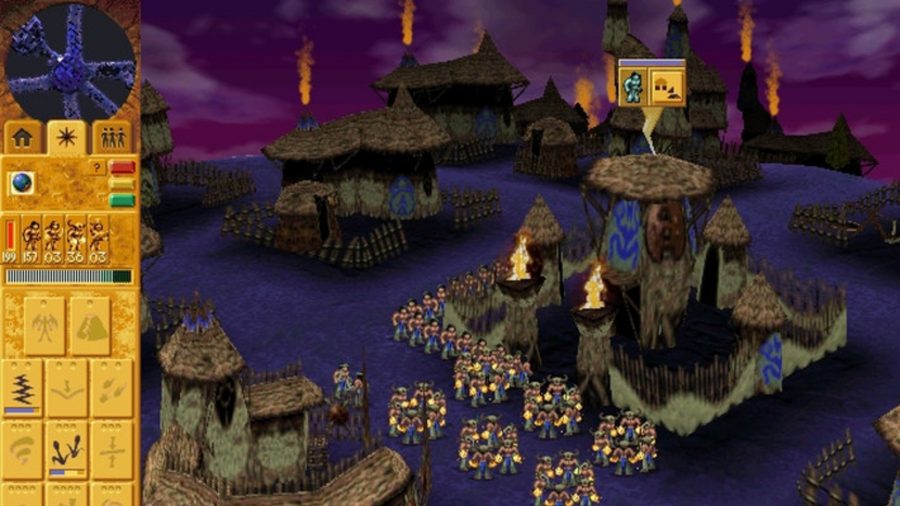 Spawned from the genius mind of Peter Molyneux, the first Populous game – released on the Amiga in 1989 – essentially created the ‘god game’ genre. Its second sequel, Populous: The Beginning, released in 1998 and was the first in the series to be playable on PC. While its predecessors’ gameplay was purely focused on guiding the faithful to glory and battling other gods, Populous: The Beginning is also one of the best RTS games, as you can issue direct orders to your people.

You play as a female shaman, commanding a small tribe consisting of various types of followers, each with different abilities. There are three other, rival tribes in your planetary system, and your goal is to lead your people to glorious victory over them, at which point you’re finally able to ascend to glorious godhood. 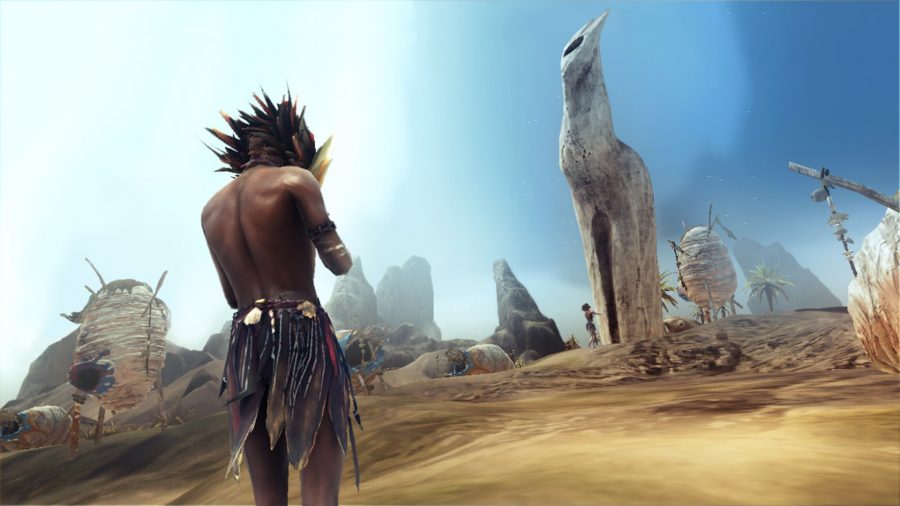 Hailed as a spiritual successor to Populous, From Dust similarly charges you with the safekeeping of a small tribe, who have summoned you to help them communicate with nature, and discover what happened to their ancestors.

Your godly essence, referred to as ‘The Breath’ – hopefully evoking some mystical life force, rather than referencing your garlic bread consumption – has the power to manipulate terrain in order to guide your people to totems, which unlock the secrets of their past. Through manipulating lava, soil, and water, you can gather great orbs of earth to help your people traverse the land, and prevent them from perishing to tsunamis or volcanic eruptions. Kind of like Moses meets The Last Airbender. 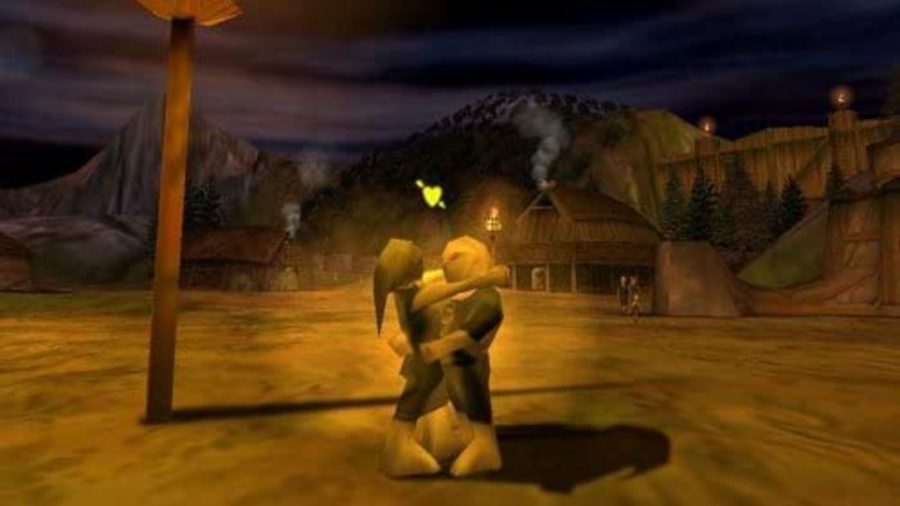 Black & White is another god game from Peter Molyneux – but as the name suggests, there are two different approaches you can take to godhood. After being summoned through the power of prayer, you interact with your followers with a disembodied hand, throwing things around, performing miracles, and tapping on peoples’ houses until they wake up. You also have a corporeal representative in the form of an anthropomorphic animal avatar of your choice, who you can teach to perform tasks – but they have a mind of their own, so you’ll have to spend time training them to do your bidding.

Your goal is to convert every village on the island to worshipping your godliness, which you can achieve by impressing them with your miraculous feats, or terrifying them into submission by pelting them with thunderbolts. The landscape, your temples, and even the music morph to reflect what kind of deity you choose to become. It’s also got a successful sequel, if you’re looking for even more subjects to glorify you. 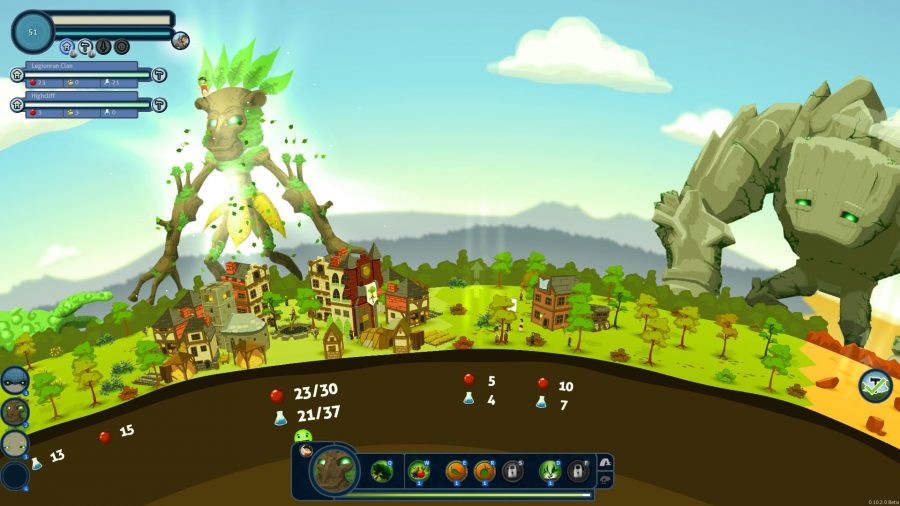 Reus is Dutch for ‘giant’, and if you squint, it kind of looks like Deus, which is Latin for ‘god’ – so it’s no surprise that this god indie game gives you control of four elemental giants who can influence the planet beneath them. Each giant god – ocean, forest, rock, and swamp – can create landscapes and assign resources depending on their specialisms – after which, the humans move in and set up shop on your planet.

Nature is a delicate balance, however, so you can’t rain down resources willy-nilly, as the humans will become too greedy and fight amongst themselves. To counter this, you’ll have to encourage awe and humility in your population, or make their home environment so dangerous they’re too busy fighting for their lives to fight each other. 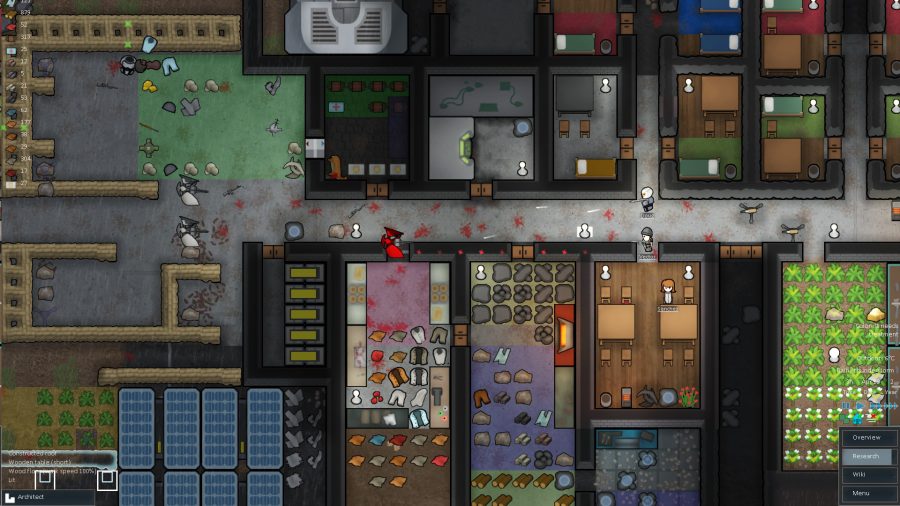 Rimworld isn’t your typical god game – it’s a colony management sim where your job is to ensure a group of colonists, stranded on the frontiers of space, survive for long enough to escape the planet on a spaceship. The colonists each have random traits and skills; you can give them instructions, but there’s a strong element of chaos and unforeseen disaster in Rimworld, so your colonists might disobey you and go on a fire-starting spree instead.

You might not receive the offerings, sacrifices, or songs of worship you deserve, but in essence, there are still rival deities you must contend with – Rimworld’s inbuilt storytellers, who send waves of disaster at varying intervals towards your clueless pawns. 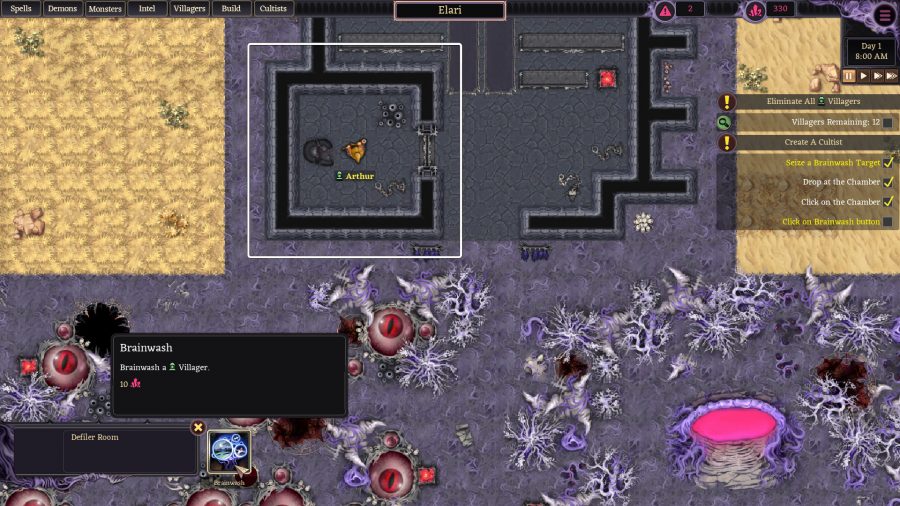 Sick of caring for the ignorant masses? Tired of gently shaping the earth to help the little humans achieve health, wealth, and happiness? Are you, perhaps, also a sadistic monster? If torture, cruelty, and lies are your favoured methods of population control, Ruinarch lets you step into the big evil cloak of a demonic overlord, on a quest to spread misery and misfortune across the land.

Like Rimworld, Ruinarch is a sandbox simulation game – a story generator without concrete goals. Instead, it gives you a multitude of cruel and unusual tools with which to terrorize the populace – you can brainwash the villagers, for example, converting them into cultists who worship you. You can create necromancers, zombies, werewolves, and other horrors – or you could just dump a big meteor on their heads. 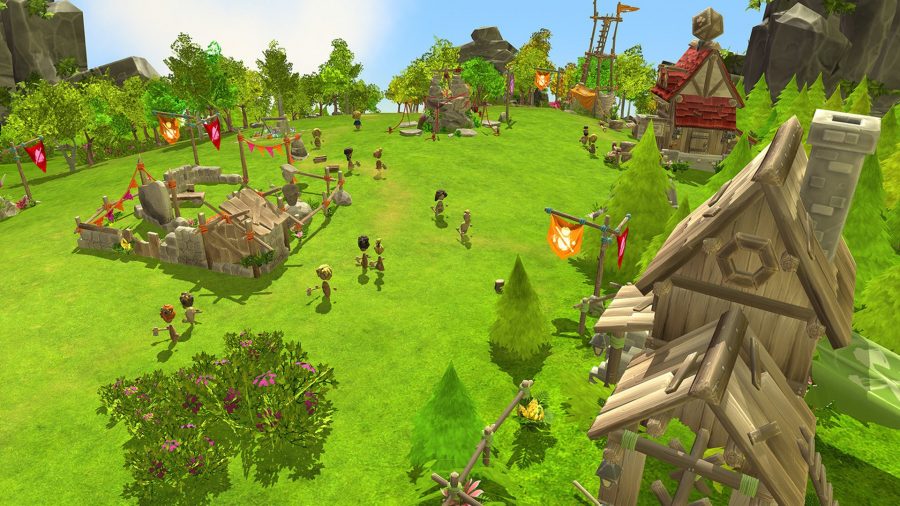 It’s still in early access, but Crytivo’s The Universim is a classic god game, along the lines of Populous and Black & White. The Universim gives you the power to shape a civilization from Stone to Space Age, and then across the universe. You’ll need to look after your ‘nuggets’ – your citizens – by ensuring they have enough resources to survive the ever changing environment on their randomly generated planet, and continue to develop into an advanced society.

If you successfully manage your nuggets, you earn Power, which you can spend on altering the world to make life easier for them. But if they get out of hand and start acting up, you’ll earn Wrath points, which you can use to punish them and scare them back in line.

O great and powerful one, we pray these god game offerings were enough to quell your immense and terrible wrath, at least for the rest of the day. Perhaps you would enjoy applying your large almighty brain to some strategy games, or rest your all-seeing, celestial eyes with some relaxing games. Amen.