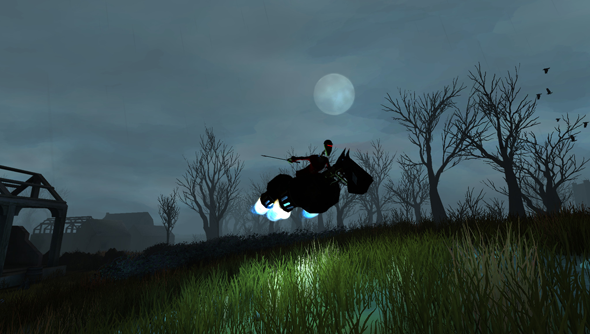 Sir, You Are Being Hunted’s still in alpha but with each month it’s getting new NPCs, items, island biomes, and generally becoming the steampunk robot vs man manhunt that we’ve always wanted to play.

Beta’s still a few months off buy Big Robot have written a blog post explaining what people can expect to come in the closing months of the alpha. Hovering horsemen and multiplayer, my friends.

The major updates between now and beta are two now NPCs, The Landowner and The Rider; there’s also a new biome, the castle biome; and the thing that we all want, multiplayer.

The Landowner’s a top tier robot. One that only appears in the late game when you’ve collected together most the parts of your teleportation device. It’s armed with a long barrel rifle and it will be able to track you over most terrains.

As worrying as the Landowner will be for players it is The Rider that you should be fearful of. The machine rides a hovering horse and can cover ground far faster than you can. Apparently the team already have it working in game but it needs tweaking before it can be released into the wild of the alpha.

One of the final updates to the game will be the inclusion of the castle biome. That will generate islands of solemn stone architecture, tall towers, and drawbridges. It should be a pretty foreboding place. With the final biome in place Big Robot say that they’ll “give you greater access to the world generation tools.” That should allow for greater variation on the islands.

Finally, multiplayer. “We’re actually several weeks into that,” write Big Robot. “Our other new chum Tim has been hacking away at the jungle-like codebase of Sir, and has knocked some early dev prototypes for this. We’re a long way from being able to play it, let alone release it, but those vital early steps have been made, and it’s happening. We’re going to enter a whole new chapter of Sir, and it’s about as wonderful as any feeling in game dev can be.”

“We don’t have dates on all this, of course, but if the beta isn’t underway within a couple of months of 2014 starting, then we’ll be regarding ourselves as behind schedule.”

I’ve been playing a fair bit of Sir and you should definitely pick it up if you see it on sale over Christmas.

{"schema":{"page":{"content":{"headline":"Sir, You Are Being Hunted roadmap published. Hovering horsemen and multiplayer on horizon","type":"news"},"user":{"loginstatus":false}}}}