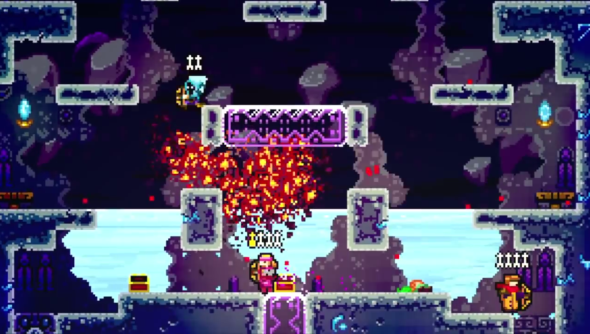 Boo, Towerfall Ascension. Boo. That’s what I say to your purely offline multiplayer. Well, that may be too harsh but, still, it’s rare that I can get four friends round to share a single screen. It’s much easier to amass a group online.

However, it’s hard to stay angry at Towerfall for too long, what with all the added content we’re getting with the PC release.

The news game from Towerfall’s developer, Matt Thorsten, who was responding to a question from Polygon scribe Arthur Gies:

@aegies no online! There is substantially more 1p and 2p content, but you’ll need 4 controllers for 4p versus still

For a start, there’s the new co-op mode that sees you and a friend battle through towers against AI opponents. On top of that there are 50 new levels and a load of new items.

You can see some of them on show in this trailer:

The bestest of all the additions is the level editor. Not available in the game’s original Ouya release, it should see a mass of new towers being constructed and added to the game’s roster, providing a near endless number of levels to be played through.

Unfortunately, all these new updates are taking more time than Thorsten originally planned. He was hoping for Ascension to be in our hands before Christmas but that release has now slipped into “early 2014.”

Towerfall’s been the best received game to have been released on the Ouya so far and it’s good to see that it’s making the jump away from platform exclusivity. I’m really looking forward to getting my hands on it in the new year.