Intel are reportedly putting a temporary hold on manufacturing their H310 chipset, just over a month after they launched the Intel Coffee Lake chipset in early April. Sources reported to DigiTimes that manufacturing constraints for Intel’s mainstay 14nm process are to blame for the production halt.

Intel switched from a 22nm process to a 14nm lithography for their latest 8th Gen Coffee Lake chipset PCH (platform controller hub). The H310, H370, B360, and Q370 chipsets utilise the newer, denser process, while the enthusiast Z370 chipset – which launched back in October, 2017- is manufactured on the 22nm process.

Supposedly, the ongoing delays to Intel’s 10nm process has caused increased demand for the 14nm process, and therefore scuppered Intel’s plans to gradually renegade this process to chipset production. This high and unexpected(?) surge for 14nm after further 10nm delays has left the low-end budget chipsets from Intel first to end up on the fab-room floor.

The sources indicate that the manufacturing stranglehold would remain in place until July, 2018, and would restart from that time onward. Motherboard manufacturers are supposedly adopting B360 in its stead, although it carries a higher cost. 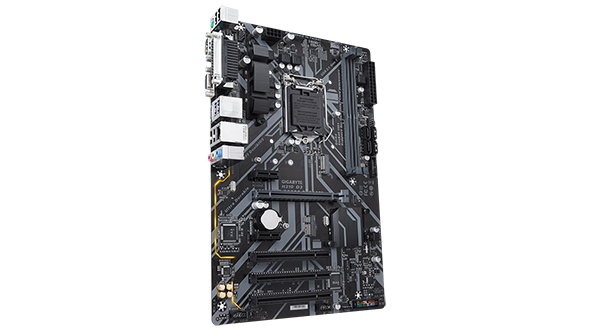 It seems a strange move for Intel to update the chipset design when 14nm production is supposedly so limited at this time. The 10nm lithography, which will eventually absorb most of the current 14nm demand, has been subject to massive delays for years. Intel CEO, Brian Krzanich, recently announced further delays to the first real release of any 10nm chips until, at least, 2019 to improve yield rates. That likely means Intel’s 9th Gen chips are not going to break the 14nm cycle.

The arrival of the Z390 chipset on the 14nm process also could leave the current enthusiast Z370 chipset in a strange limbo between generations. Intel’s new Z390 chipset has been pegged as the ‘true’ successor to the Z270 chipset, with the Z370 merely filling the gap in the market as Intel rushed to combat AMD’s Ryzen chips. Recent rumours suggest Intel’s Z390 chipset may even support Intel’s upcoming 9th Gen processors, alongside an eight-core Coffee Lake chip to combat AMD’s Ryzen 2 chips.

Intel’s Z390 chipset will almost certainly feature the new 14nm process PCH to round off the 300-series chipset stack. It’s possible then that Intel’s 14nm manufacturing limits could lend to tight supply of other motherboards, or the Z390 motherboard itself, as 9th Gen CPU production ramps up towards the end of the year.

Intel are also unlikely to ramp up 14nm capacity on the eve of 10nm – even if this process is struggling with profitable yields currently – and that fabrication capacity will have to be taken from elsewhere within their crowded 14nm product stack.

It’s more bad news for Intel’s fabrication division, as the chip giant struggles to maintain production of current product lines and develop its new lithography. While Intel will likely continue to lead the market for some time to come off their current momentum, supply woes, process leadership insecurity, and consumer chipset confusion only serve to increase the threat from AMD.