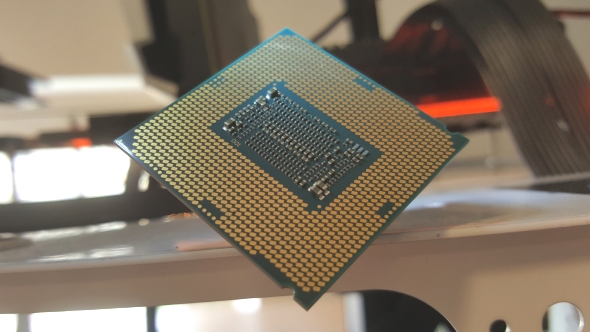 It seems Intel are preparing to go on the offensive against the upcoming AMD Ryzen 2 processors with their very own range of mainstream eight-core processors. Yes, an octacore Intel Coffee Lake CPU has been spotted lurking in the 3DMark database.

Can’t wait that long? Check out our pick of the best CPUs for gaming right now.

With the second generation of AMD Ryzen chips set to launch in only a matter of weeks now it’s about time we started to hear a little bit more from Intel. They weren’t just going to let AMD launch a whole CPU range unchallenged, where they? And a mainstream eight-core / 16-thread Coffee Lake chip is surely their only real option to right now.

The listing on the 3DMark database is pretty light on details and pretty light on power too, if the minimal specs are to be believed, which makes us think this is a relatively early engineering sample being put through its paces. The initial report claims the CoffeeLake S82 UDIMM RVP is a recognised Intel testing platform, and given the low 2.2GHz clockspeed, and lack of any name or process information, the likelihood of it being early silicon is pretty high.

Which means this eight core Coffee Lake chip isn’t being introduced any time soon, so AMD may have some clear air for their Ryzen 2 chips for a while. If it was imminent we’d have expected to see these sorts of benchmarks being run by motherboard manufacturers in their own board, not Intel test platforms.

And, from what our industry sources have told us, that kinda makes sense. We’re expecting the budget 300-series motherboards to be with us soon, but they’re not going to deliver the sort of platform you’d think would accompany a high-end CPU launch. That’s more what you’d expect from the touted Z390 chipset reveal.

That, we’re being told, is not going to happen until September or October this year. And as the Intel Z390 boards aren’t expected to provide anything above some extra native USB capabilities they desperately need some sort of hardware support to make them seem in any way worthwhile. No one would be upgrading to a Z390 board if there wasn’t a better reason than USB 3.1 gen2 support, but an eight-core i7 – or even Coffee Lake Core i9 – might just offer that.

And if AMD had some inkling that an eight-core Intel chip might be in the offing that might explain why a potential top-end Ryzen 7 2800X hasn’t been seen in any of the leaked benchmarks so far – they could well be keeping their absolute best Ryzen 2 chip in reserve.