Anyone would think Intel’s Coffee Lake chips were imminent or something, what with all the processor leaks dribbling out right now. The latest gives us Cinebench scores for a stock-clocked Core i7 8700K that has the Core X-series i7 7800X looking like it’s in big trouble.

Your CPU is only one part of the equation, so make sure you’ve got one of the best graphics cards to go with it.

So yeah, Intel are cannibalising the Skylake-X, and by extension the Kaby Lake-X, range of processors with their new, cheaper six-core set.

Karl Morin, a Canadian journalist at Dreamhack Montreal, came across an errant HP Omen gaming rig that was somehow sporting one of Intel’s brand new, six-core, 12-thread Core i7 8700K processors. As an enterprising sort, he borrows a monitor to plug in and gets himself some Cinebench numbers.

The figures show the 8700K delivering a Cinebench multi-threaded score of 1,230 and a single-threaded result of 196. If you compare that with our current favourite gaming CPU of today, the similarly specced Ryzen 5 1600X, you’re getting the same level of all-core performance. When you consider that the AMD chip will be some $100 less, according to the recently leaked Coffee Lake pricing, that doesn’t sound too good for Intel. 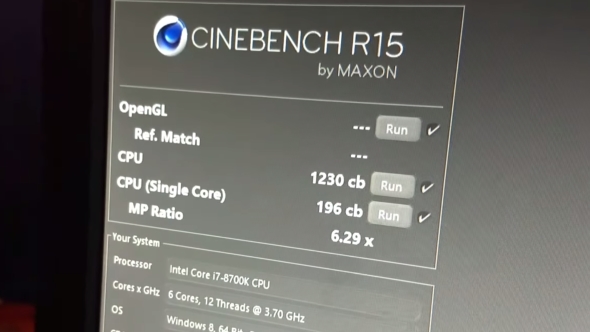 But that’s not taking into account the single-threaded performance of the top Coffee Lake CPU. In Cinebench, the R5 1600X scores 161 at its stock 3.7GHz clockspeed – running at the same frequency the 8700K is then some 22% quicker, and that could have a pretty large impact on gaming performance too.

So, how does that chime with those reports of Coffee Lake’s performance lead over the old Kaby Lake chips? Running at 4.5GHz, the 7700K is still a few marks short of the single-threaded Cinebench index score, so when the 8700K is in its final released form there’s every chance that running at the same clockspeed it’ll nail that proposed 11% performance boost.

It’s also worth remembering that these scores are from a Coffee Lake chip running at a dead 3.7GHz – just look at the weird multiplier/bus speed config in the CPU-Z screen shot. When Turbo frequencies get involved I wouldn’t be surprised to see scores in excess of 1,500 and 215 for multi- and single-threaded Cinebench performance respectively.

In terms of this level of multi-threading, however, it’s only some 26% faster running at 3.7GHz vs. the 7700K operating at 4.5GHz, which still gives it some headroom to make up the 51% performance increase we’re hoping for.

One other interesting thing to note about the 8700K scores is just what that means for the Core i7 7800X. The low-end Skylake-X hexcore is about the same price as the 8700K, but with higher overall platform costs, and will get absolutely hosed as soon as you start upping the Coffee Lake clockspeed. Intel are effectively making the chip obsolete just a few months after release. 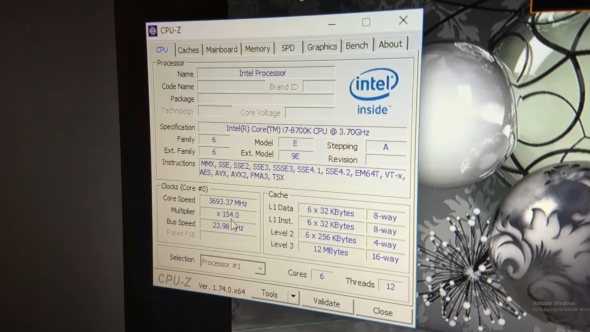 When it comes to the Ryzen 5 1600X, though, it’s not the Core i7 Coffee Lake chip that we’re really interested in, it’s the similarly priced Core i5 8600K. That doesn’t have the benefit of Intel’s HyperThreading tech, but does still retain six cores and all that single-threaded goodness, which ought to make it a gaming monster. That’s where the real Intel vs. AMD, Ryzen vs. Coffee Lake, battle will be fought for our gaming hearts and minds.