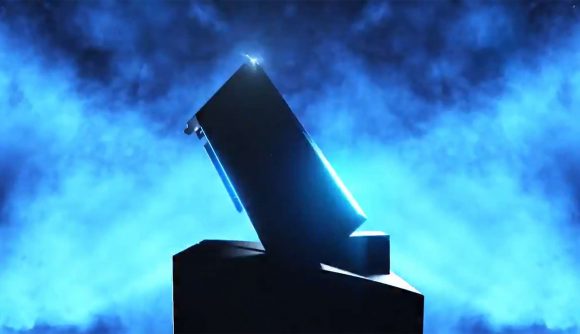 Intel has chosen a name for its next-generation discrete graphics card, set for release in 2020, and that name is: Intel Xe. I’ll be honest, it’s pretty uninspiring and we’re still trying to figure out whether we disappointed or glad about the fact the company has steered itself away from the brink of calling its new GPU Graphics McGraphicscardface.

Intel recently took to reddit to engage in an ‘Ask You Anything’ where it hoped to garner community support and feedback from its engagement about the new discrete graphics card project. Its engineering and GPU marketing team asked questions on topics from Linux driver support, preferred resolutions, and ideal monitor refresh rates. But it also asked for suggestions on what Intel should be calling its next-gen GPU… which rang alarm bells in our hands.

Thankfully, cooler marketing heads seem to have prevailed and Intel isn’t going to be putting the name for its new discrete card up for public vote. Instead we are left with the name: Intel Xe. Now, I’ll be honest, after the tit-for-tat naming bun fight that has accompanied Intel and AMD CPUs over the last year or so it does seem like the new name’s a pair of marketing brass cojones away from being Intel Xen.

The name, Intel Xe – or Intel Xe depending on your preference – was unveiled at the recent Architecture Day, where the company also divulged the name, and future roadmap, of its next generation of Core processors. The Intel Sunny Cove CPUs will launch late next year, using both a new 10nm production process, and a whole new microarchitecture – hence why it’s no longer a Lake.

There will be other Cove, Willow Cove, doing the rounds at the 2020 point where Intel is aiming to bring the Xe graphics card to market – the GPU whose name we only previously knew as Arctic Sound.

To be fair to the chip manufacturing giant, Intel Xe does at least sound better than Arctic Sound. I mean what is that, the sound of ice cracking, or dry-humping icebergs?

There hasn’t been much extra data given out about the new Xe GPU, aside from the fact that it is being designed to scale from client computing all the way up to massive data centres, with Raja Koduri saying it “scales from teraflops to petaflops.”

The slide showing the Intel Xe scaling indicates that Intel is looking to use the Xe GPU as an integrated GPU for its future processors – though the CPU roadmap says nothing nothing about new GPUs for the Willow Cove chips. But it will also be creating entry level discrete cards, as well as mid-range and enthusiast-level Intel Xe GPUs.

And then what looks like the broadest segment of Xe silicon is in the data centre/AI field, potentially indicating that is a greater focus for the new GPU than the rest. If you take the product slice imagery as an indicator then the data centre and integrated/entry-level segments are where it sees the biggest areas for Intel.

Before then we’ll have the Gen11 GPUs hitting the Cove processors as their integrated graphics components. Intel has promised to boost the execution unit count by a huge amount, going from 24 to 64 EUs, and delivering greater than 1 teraflop of graphics performance. That should at least give the top Intel CPUs a good chance at hitting high 720p gaming performance, along the same lines as AMD’s 2200G Raven Ridge chip.