Intel have finally, officially, taken the wraps off their upcoming Z390 chipset, the high-end replacement for the current Z370 motherboards we’ve known was coming for around half a year. Coming vaguely lukewarm on the heels of the mainstream H370, H310, and B360 motherboards, the new chipset will complete the latest Intel lineup, all using the same platform controller hub (PCH).

Check out our pick of the best Intel motherboards around today.

The current top-end Intel Coffee Lake motherboard, the Z370, still uses the old 22nm Kaby Lake PCH, while the more recent, but lower-end, mainstream boards have been released with 14nm silicon based on the unreleased Cannon Lake PCH. Unfortunately, due to the increased reliance of Intel on 14nm chip production they’re not producing enough to keep manufacturing H310 motherboards. Fingers crossed they’ll have enough capacity to get a decent number of Z390 boards out of the door when they do launch later in the year.

But given the limited upgrade the Z390 chipset represents we doubt there’s going to be a particular rush on the new boards, unless there’s some sort of incentive. Maybe an artificial locking of a potential eight-core Coffee Lake to the shiny new mobo? 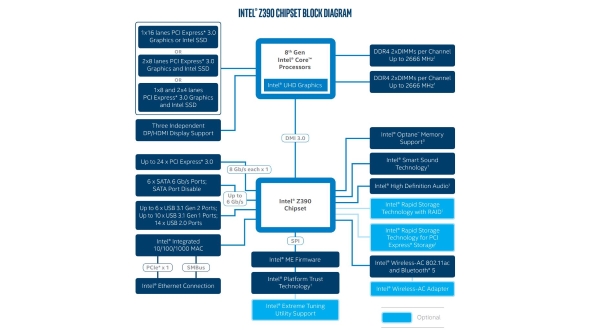 There’s still no official launch date set for the Z390 motherboards in the new Intel documentation, but we had heard rumours of a September launch, so we’re expecting to see lots of them adorning the stands of every motherboard maker out at Computex in June.

All it seems the Z390 chipset is going to offer over the old Z370 is native support for the higher-speed USB 3.1 Gen2 interface. Most Z370 boards have some non-chipset support for USB 3.1 Gen2 using other companies’ silicon, so it’s not like this isn’t something you already have access to on your high-end Coffee Lake motherboard.

The Z370 boards were only meant to be stop-gap boards, allowing Intel to launch the Coffee Lake lineup early using the Kaby Lake chipset. The plan was for Z370 to have just a six-month shelf life, with Z390 launching alongside the other mainstream boards in the spring, but it would have been difficult to get mobo manufacturers to get on board with such a limited lifespan. Hence Z390 getting pushed all the way back towards the end of this year.

By that time we might even have an AMD-based Z490 board getting released just to confuse and frustrate everyone. Bless ‘em, they’re really going for Intel nomenclature jugular right now…