Intel has been given the go-ahead for a $4bn development at its manufacturing plant in Leixlip, Ireland. Fab 24 in Leixlip is currently one of just a few locations Intel owns worldwide that produces 14nm chips, and this latest investment will see Intel build a new fab facility at the location to keep its manufacturing efforts ticking over as it seeks to take on TSMC and “never again” be a constraint on its customers.

The plant was first opened in County Kildare in 1989 and has been on the receiving end of some $13.9bn of investment since to keep it up-to-date. The latest being some $5bn in 2014. That chunk of change netted the fab the ability to produce 14nm product on cost-effective 300mm wafers.

Alongside similar expansion plans at the site, totalling some $8bn total investment, the new facility is expected to take on 7nm EUV production. Intel is gearing up for 10nm volume launch this year with Intel Ice Lake. However, due to the 10nm node’s elongated development cycle, it will be swiftly succeeded by the 7nm process node in 2021. In which case, Intel has only a small window to ensure suitable manufacturing capability will be online when that day comes.

But the new Ireland fab expansion is unlikely to be finished by 2021, or realistically anytime soon after that (via AnandTech). That means the Leixlip site won’t be online for the first round of 7nm chips.

Supercharged: These are the best CPUs for gaming right now

Timing would suggest it will be responsible for 7nm designs utilising EUV lithography tools. These specialised tools reduce the need for complex patterning and masks during the manufacturing process.

The investment over in Ireland is set to significantly boost the surrounding area with both new council funding – to the tune of €9.72m – and new job opportunities (via the Irish Times). Some 6,000 construction workers will be required to complete the expansion and development, and, once completed, the fab will require another 1,600 full-time employees. 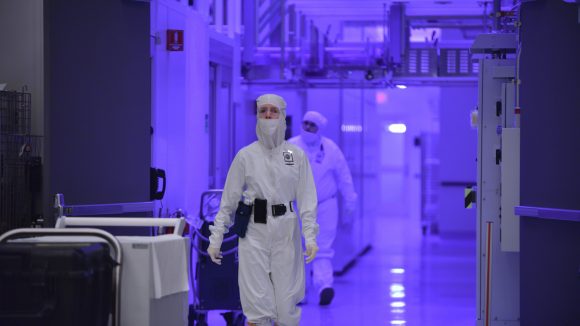 Intel recently claimed the number one semiconductor manufacturer spot by sales in Q1 2019, knocking Samsung out of the top spot due to the memory market slowdown and price plummet.

Intel is currently looking to shift over to 10nm production en masse, following many years of development hell. The first products to arrive on the latest node will be Intel Ice Lake, followed by Intel Tiger Lake in 2020. It has also significantly invested in advanced process node development, including $7bn over in Oregon at its D1X research factory.

Desktop processors are expected to remain on the current 14nm process through this year and next, with Intel Comet Lake next on the agenda rocking up to 10 cores. Meanwhile, AMD is expected to release its AMD Ryzen 3000 processors, packed with 7nm Zen 2 chiplets, next week at Computex, which could certainly knock Intel for a loop.