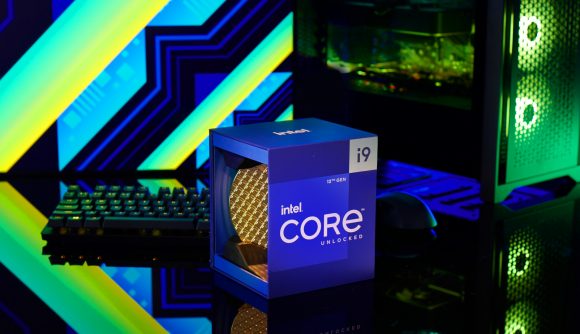 Intel processors have largely played second fiddle to AMD’s Ryzen chips over the last couple of years, in just about every market you can think of. That could all change today, however, following team blue’s official reveal of its Alder Lake gaming CPUs at Intel Innovation. The company claims its 12th generation processors offer some serious improvements over its previous Rocket Lake components and could, finally, provide some serious competition to AMD, starting at $264 USD.

Pre-orders for the Alder Lake processors are live, but you might want to be quick amid chip shortages if you want to snag one for your gaming PC! If you’re not sure which CPU to go for, then read on for our breakdown of each chip announced today.

All of Intel’s 12th generation components will require a new motherboard with an LGA1700 socket, each of which support PCIe Gen 5 and DDR5 gaming RAM. However, you’ll be able to migrate your DDR4 RAM over to your new build, provided your motherboard supports it.

Starting with the best gaming CPU of the Alder Lake lineup, the Core i9-12900K is a 16-core processor with 24 threads. The 16 cores are comprised of eight performance cores (P-cores) and eight efficiency cores (E-cores), with the 24 threads divided into two threads per P-core and one thread per E-core. It’s an absolute powerhouse on paper with a clock speed that can turbo up to 5.2GHz, but this costs a sizable sum of $589 USD.

The i7-12700K might not quite match the insane core count of its bigger brother, but its 12 cores (8P+4E) and 5.0GHz turbo boost clock should provide a high level of performance in both games and production-based tasks. It’s also quite a bit cheaper, with its $409 USD price point making it almost $200 less expensive than the i9. Opting for the i7 might be the smarter choice, as it allows for that extra cash to be spent on new DDR5 gaming RAM and a Z690 motherboard. 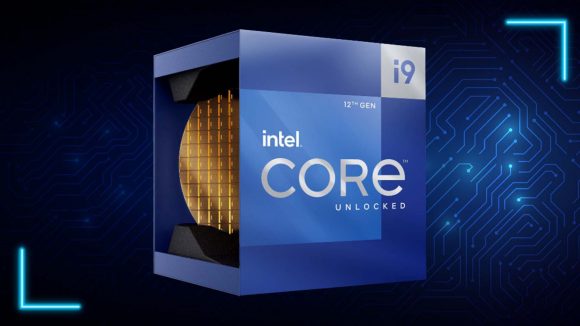 If you have no need for integrated graphics, there are KF skews of all the processors we’ve detailed above, which cost $25 less than the full fat K versions. Whether you decide to pick up an Alder Lake processor today or not, they’ll all be released come November 4. 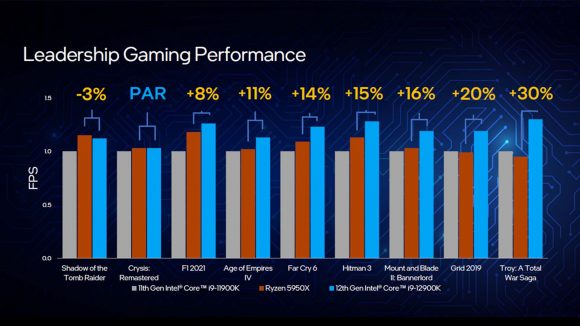 Intel provided some internal benchmarks of how its Core i9-12900K performs against the Core i9-11900K predecessor and its main competition, the AMD Ryzen 5950X. The 12900K provided the best level of performance in seven of the nine games tested, with an average performance lead of 12% and gains versus the 59050X and as high as 30% in Troy: A Total War Saga.

Unfortunately, there’s a giant caveat that comes with these results. Intel’s benchmarks were conducted on Windows 11 which, at the time of testing, had a bug that reduced AMD processor performance by as much as 15%. In the meantime, take these numbers with a healthy dose of salt.

Regardless, we’ll need to see how these chips perform away from a curated space and in different configurations before we can put any stock in where Alder Lake sits in the grand scheme of things, but initial signs point towards a worthier upgrade than the 11th generation.