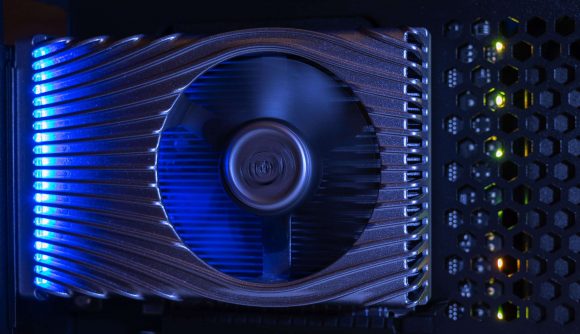 Intel’s DG2 graphics card is set to disrupt the GPU duopoly, going up against rival high-end models such as the AMD RX 6800 and Nvidia GeForce RTX 3070. It looks like Intel is gearing up for a release soon, with the company’s game developer relations engineer Pete Brubaker tweeting a job opportunity for a similar role, while including that “DG2 is right around the corner”.

The job description mentions collaborating “closely with game developers optimising their code and enabling the adoption of new technology”, further suggesting this is related to an ever-closer release of the DG2 model.

Soon after this tweet, Igor’s Lab gave the scoop on Intel’s launch plans, claiming that Intel will begin by manufacturing mobile GPUs before moving onto desktop variants at the very end of the year – so it could still be a number of months until we see Intel’s name appear on our best graphics card guide. The report lists five different SKUs, although it’s not clear which are destined to mobile or desktop PCs.

Matching earlier rumours, it claims the high-end SKU will pack 512 execution units, along with 16GB of GDDR6 VRAM. For the mobile variant, it’ll run at base and boost frequencies of 1,100MHz and 1,800MHz respectively, along with a TDP rating of 100W. The RTX 3070 Mobile on the other hand has a higher 125W rating, so Intel’s mobile GPU could run cooler in the best gaming laptops.

If Intel can sidestep the GPU stock issues affecting both Nvidia and AMD, as well as provide the performance to boot, it could be on to a winner desktop graphics card that disrupts the duopoly as we know it.