With a stock water cooler and without modification, you can get Intel’s Core i9 7900X up to 4.8GHz. Or delid it and go for the big 5GHz…

The next big CPU smackdown between Intel and AMD draws ever closer, but which company sits on top of our guide to the best CPUs right now?

Recently, we covered Intel’s decision not to solder their upcoming Skylake-X CPUs – the first time they’d done so for a high-end desktop platform. The news wasn’t met with much favour. Rightfully so: customers were angry that an inferior thermal interface material (TIM) was being used on chips Intel plan to charge up to $1,999 for, a decision which could cause a performance drop when HEDT users want the best of the best. 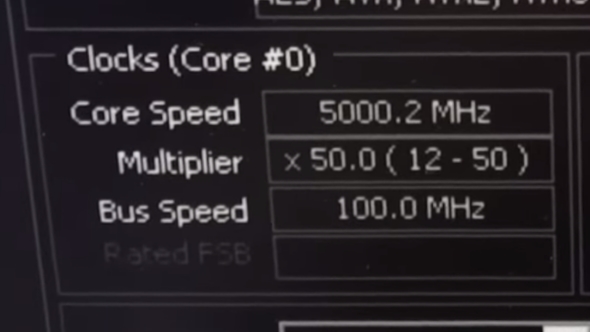 Now for some news the blue team fans may like more. Overclocker der8auer (the same fella who delidded the Skylake-X chip the first time around) has overclocked an Intel Core i9-7900X to the tune of 5GHz by delidding it, replacing the stock TIM with liquid metal, and using a Corsair watercooler. Even with these adjustments, this brought the max temperature up to 90°C. Hey Intel, not all of us have liquid helium lying around…

Before popping the top on the chip he made sure to overclock it in its stock form, and got an impressive 4.8GHz by using the same Corsair AIO cooler. That’s the more likely option for most consumers, as delidding means at the very least you’ll be voiding the warranty on some very expensive tech. At worst, you’ll be off to the shops to buy another.

He goes on to speculate that with custom water cooling it might be possible to drive the temperature down and achieve a clock speed of 4.9GHz without delidding, so even with the lack of soldering these CPUs aren’t sluggish.

He also notes that this chip clocks a lot higher than Intel’s Broadwell-E 10-core, the i7-6950X, and at a much lower price. $659 less, to be exact. That’s definitely good news for the Intel faithful, but when you compare the reported $999 Intel want you to pay for their 10-core with AMD’s rumoured $849 pricing for their 16-core Threadripper CPU, it still pales in comparison. AMD would be giving you six cores more for $150 less.

Of course, until we get a price announcement from AMD and put these competing chips through our test rig, we won’t know for sure which one you should open your wallet for. But it’s nice to know at the very least those with deep pockets can soon get their hands on some mighty powerful gaming tech.