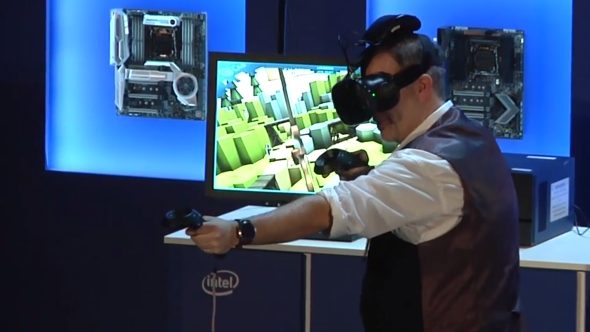 Not content with announcing a 32-thread Skylake-X CPU, or a hefty performance boost for their 8th gen Coffee Lake chips, Intel also announced today they’ve teamed up with HTC to integrate their WiGig wireless tech into HTC’s Vive headsets to free them from wires.

You can’t run VR without the graphics tech to match, so check out our guide to the best graphics cards on the market today.

We’ve taken issue with the cabling on VR headsets before – after all, nothing breaks immersion quite like being drowned in wires – and it would seem that HTC have the same opinion. By manufacturing wireless adapters using WiGig technology and selling them as an optional extra they’ll manage to tick a big gripe off the VR improvement list.

The Vive’s current system uses a 3-in-1 cable that runs up the user’s back, and then over the back of the head into the top of the headset, with a second cable for audio. It’s not the prettiest solution, and being slapped in the back by wires while you’re trying to murder zombies can be a little distracting to say the least.

Demonstrating the wireless alternative on stage, Intel’s Craig Raymond seemed to think that a cable-free option was the next logical step. “Not having to be mindful of where that cord is… this is the level of immersion that we’re looking for [in] the next generation of VR,” he explained.

And it most definitely is right at the top of VR’s wish-list, but that is one chunky add-on WiGig module in its current guise. Hopefully the set Raymond was wearing on stage is just an early prototype because, if that thing weighs as much as it looks like it might, they’re otherwise just going to be swapping one problem for another. 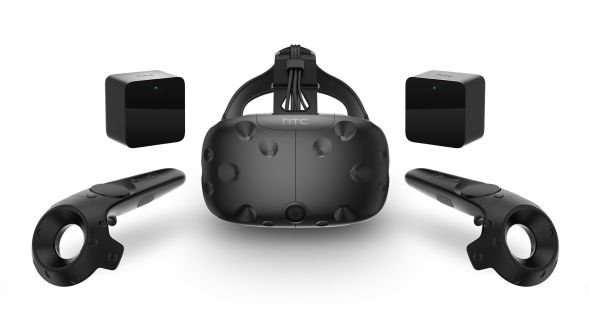 Intel’s WiGig tech works using radio waves in the 60GHz frequency band, promising interference-free, low latency gaming. This also reportedly makes for ‘pristine video quality’, although VR headsets still have a way to go before their screens are pumping out the pixels to truly impress. The resolution of the Vive, for example, is capped at 2160 x 1200 (1080 x 1200 per eye).

Those lucky enough to be at E3 this year will be able to check out the proof-of-concept at Intel’s booth before the final version hits the market in early 2018. We’ll be there to get our sticky paws on the latest gaming tech, so we’ll bring you more details on this as we have them.

One big question remains: how much will it cost? We’re hoping for ‘less than a house’, but seeing as it’s VR…