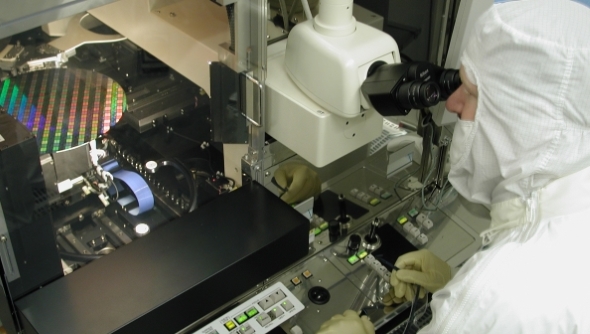 Yesterday we saw what looked like a 10nm Cannonlake CPU sample being put through its paces in the SiSoft Sandra database and now Intel have confirmed the chips are on track and their Ice Lake successors have reached the ‘tape-in’ stage. In short, 10nm chips aren’t myths, they coming. Honest.

Super small silicon is one thing, but when they’re all put together what makes the best CPU for gaming? Step this way to find out…

After a lot of delays Intel are keen for you to know they’ve sorted out their 10nm issues and that processors using the latest production process are going to be here this year. They’ve even resorted to Twitter to ensure they get their message out too.

Another milestone for 10nm: Cannon Lake on track and we’ve now taped in Ice Lake, our 2nd-generation 10nm product. pic.twitter.com/DUDm3MsBaB

The original plan was to get 10nm processors out of the door way back in 2016. You know, back when all our PCs were powered by steam engines. But Intel struggled getting the design and manufacturing to a level where they could mass produce the new CPU node in decent volumes which lead to a delay until this year.

That said, we’re only seeing relatively low-powered mobile CPUs using the new 10nm Cannonlake design. The more complex, higher-power desktop chips are still stuck on 14nm and look like they will be well into 2018.

Still, it’s kinda promising the 10nm Ice Lake CPUs, which will follow the Cannonlake design, have now reached the tape-in stage. This stage is the first stop in the manufacturing process of complex, multi-part processors. This is where individual circuit designs for the chip are finalised and are ready to be combined and sent to the fabrication facilities for actual testing. It’s not the end, and doesn’t mean the CPUs are ready to be created en masse, but it’s still a very important step along the way.

It’s possible these Ice Lake processors will represent our first taste of 10nm on the desktop with Intel skipping Cannonlake outside of the notebook market, sticking with Coffee Lake until the Ice-y ones appear at the end of 2018.

Intel have also been talking about their 7nm production process too, with CEO Brian Krzanich telling an investors conference that their teeny-tiny transistor designs are likely to land between two or three years after 10nm chips enter mass manufacturing. They’ll have run out of lakes by then…