Intel has promised to get to work improving its manufacturing capacity to prevent another drastic shortage like the one it’s still dealing with on 14nm. Bob Swan admitted Intel’s shortcomings matching customer demand somewhat more overtly than in his previous open letter addressing the issue and has now pledged the company “never again to be a constraint” on its customers’ growth.

Swan made the remarks during the company’s Q1, 2019 earnings call, during which Intel revised its full year expectations down $2.5bn to reflect weak datacentre demand, most acutely in China, and price drops damaging its Non-volatile Memory Solutions Group (NSG). It was also Swan’s first call as CEO incumbent, and probably not the numbers he would’ve liked to be reporting. It seems Intel has finally had to admit it’s not immune to the challenges facing the semiconductor industry as a whole.

Intel’s financials were a mixed bag for Q1, 2019. For starters, director of investor relations Mark Henninger accidentally called the newly-appointed CEO the interim CEO and CFO of the company within the first few minutes of the call. This was swiftly followed up by ‘technical difficulties’, a correction, and then some classic Intel bantz from Swan: “with the interim introduction, I thought on our outlook I was getting demoted already” (via SeekingAlpha).

So at least Intel are in good spirits about its slightly less rosy full-year expectations, and it seems even its investors aren’t too spooked by the whole $2.5bn ordeal either. Intel’s share price has dropped a little over 2% since – a drop in the bucket compared to Nvidia’s tumble some 30% last year.

But Intel has admitted that it will be tough going throughout the year to meet its customers’ demand, with the shortage continuing through Q3 as its “teams align available supply with customer demand,” according to Swan.

Intel’s 14nm trouble began last year, but it’s been in the works for far longer. The company has been moving towards 10nm at a snail’s pace, with delay after delay causing a whole lot of grief for every aspect of the company. The glacial progress in 10nm development led Intel to accumulating more product on its 14nm process node than it could manufacture in substantial numbers.

Eventually, the company had to admit defeat and shift its focus solely onto its best-selling high-performance and datacentre products. 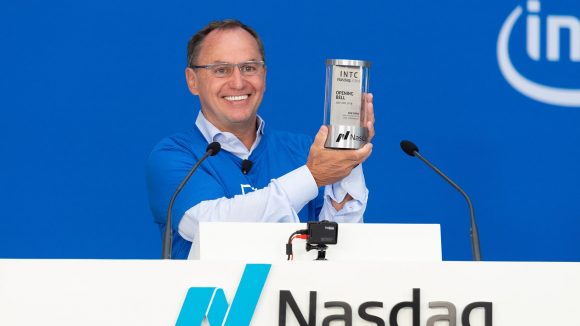 Some OEMs and system builders have reportedly made up their supply by opting for AMD Ryzen and EPYC silicon instead.

But Intel is sticking to its word and will reportedly push out “high-volume” 10nm product by the end of the year. Previously leaked roadmaps indicate this will be low-power mobile parts, with client desktop processors still a long way out. But that’s all subject to change, and leaked slides are far from the most reliable source going.

Intel is reportedly also ramping up investment in 10nm and 7nm processes, although its spending remained flat in R&D. Looks like someone at Intel just got their spending budget drastically cut.

And despite the threat from AMD, which is moving over to 7nm with Zen 2 and AMD Ryzen 3000 CPUs mid-year, Intel’s Client Computing Group (CCG) was up 4% for the quarter. So while AMD may be making waves amongst gamers, it still has a long way to go to really crank up the heat on Intel.