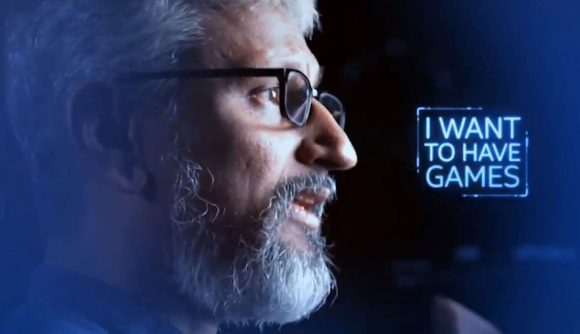 Intel’s 2019 Investor Meeting this week was chock full of hardware strategy, new CPU roadmaps, and 10nm and 7nm process insights. But it also contained a little shade being thrown over its competition by Raja Koduri, Intel’s systems and graphics architect and senior VP.

While talking about Intel’s new software strategy Koduri took time out to look at what its competition is doing in that field, with very thinly veiled references to both Nvidia and AMD. Without mentioning either by name, but with some very obvious colour palettes used, he referenced what Nvidia is doing around its GPUs, and poured not a little scorn on what his erstwhile employer is doing itself.

He was not always Intel’s Raja Koduri, but once a big noise at AMD, and as such you’d think he would have some very specific insights into the inner workings of the red team. “[AMD] has two architectures,” he says, “no memory or interconnect strategy that I know of, and the size of the developer ecosystem is tiny. In fact, without our invaluable software contributions they have no software ecosystem that’s meaningful.”

Ouch. That’s a stinging indictment of AMD’s software strategy right there, but also it seems a little at odds with what he’s said in the past. Granted, that was when he was still employed by the red team, but still it’s hard to believe he’s forgotten all about the Infinity Fabric interconnect, and the AI-centric Radeon Instinct line of GPUs that he helped start.

As AMD’s chief architect, however, Koduri did regard Infinity Fabric as an interconnect.

“Infinity Fabric allows us to join different engines together on a die much easier than before,” he once said. “As well it enables some really low latency and high-bandwidth interconnects. This is important to tie together our different IPs together efficiently and quickly. If forms the basis of all of our future ASIC designs.”

That does sound a lot like an interconnect strategy to me. 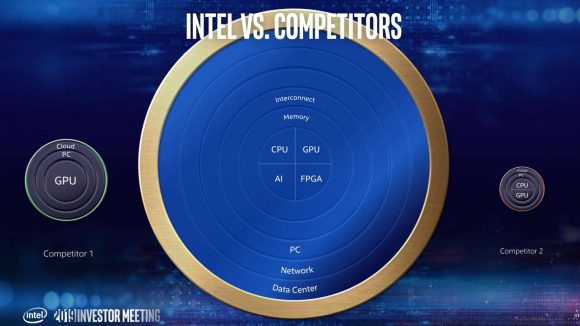 But it’s also interesting that in the comparison slide Intel actually has Nvidia (on the left) as the bigger competition, with AMD (on the right) barely a speck on its radar, judging by the scale used on-screen. There’s also no mention of any of AMD’s burgeoning data centre work alongside the interconnect omission either.

Analysts are still predicting that AMD is gaining market share in the data center despite its revenue falling, though it seems Intel is barely even registering its existence on that front. At least, that’s how it’s presenting the situation to its investors anyway…

And when you’re talking directly to the people pumping money, or prospectively pumping money into your coffers you’re always going to dial back the threat the competition poses.

But what Raja Koduri is talking about regarding Intel’s software ecosystem is actually rather fascinating. Despite almost fighting a war on four fronts, creating different architectures for its CPU, GPU, AI, and FPGA strategies, Intel is looking to create a unified API for developers to use when creating software for Intel products. 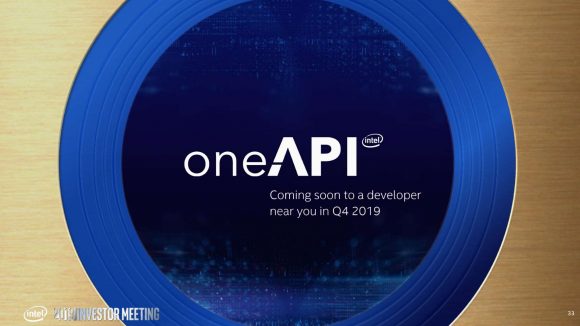 That’s a smart move as it aims to make working for Intel hardware as simple as possible for software developers.

But with the oneAPI project Intel is creating almost a one-stop shop for developers, but also one that’s open – something AMD regularly touts as a pillar of its own software strategy – and without the proprietary nature that some decry Nvidia for.

“We’re committed to open standards,” says Koduri,” open for all, and Intel has the best open source practices in the industry. We are the number one contributor to the Linux kernel stack.”

So while the shade might seem a little strong, the proffered software updates look like an interesting prospect for anyone hoping to work with Intel. And that means any products built around its hardware – maybe a high-end discrete graphics card getting released next year, for instance – will have a serious level of support from day one.