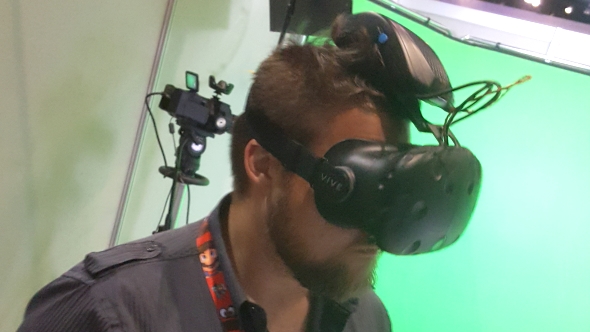 If I had Intel’s wireless Vive I might actually use VR. The setup is easier without all the cables, you’re less likely to trip over and smash your PC/die and, of course, you also look super-cool too. It’s kinda what VR needs to be.

You’re going to need a powerful GPU for VR, so check out our pick of the best graphics cards around today.

I’ve been itching to get my head in Intel’s prototype wireless Vive headset since I saw their head demo guy, Craig Raymond, pottering around on stage at Computex a couple weeks back. The cabling has long been a VR frustration of mine and one of the reasons my virtual reality gogglebox sits mostly unused next to my PC.

But I finally got the chance to play today and, while it’s not going to solve all of VR’s problems (content and cost being two of the biggest), the extra gaming freedom is tangible. With cabled VR the lizard part of my brain remains all too aware of the dangers of tripping over the myriad wires, and/or dragging my PC off the desk, to get emotionally invested in whatever game I’m playing. Get rid of the dreaded cables and that instantly goes.

The device in question, though, is very much a prototype device, as Intel software engineer, Idan Maor, was at pains to reinforce.

“It’s a prototype that we developed in cooperation with DisplayLink,” he explained. “DisplayLink does the codec, we do the WiGig, that is the wireless transfer. They want to check their product, we want to check ours.” 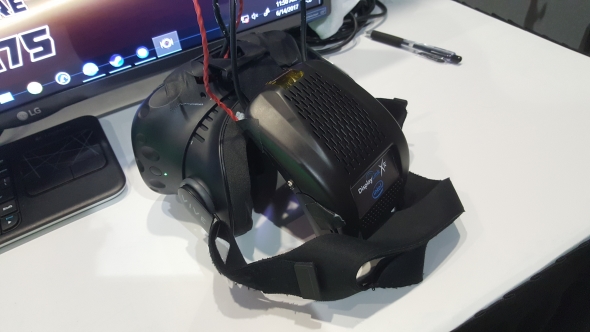 The system has been retro-fitted onto the HTC Vive, with one of the DisplayLink XR boxes strapped to the headset and another on the PC. It’s got a hefty battery in it, which is great on the one hand because it gives you over three hours of wireless VR, but a pain in the neck on the other because there’s this weighty waggly box flapping around on top of your bonce.

“When it goes to market,” says Maor, “HTC will need to decide how they want to design it, what size they want the battery – do they want a really big one so it can last longer or a sleek one that looks better, it’s their decision. I assume they want it to be a little bit smaller. You know, products are ‘cool,’ you want it to be ‘cool’.”

But waggly though it is, it worked almost flawlessly, at least for me. There was no immediately noticeable lag to the image – something which would have been instantly obvious to my inner ear and churning stomach if not my eyes. Intel say the extra latency of their WiGig product is under 7ms.

“It’s really low, low latency,” says Maor. “WiFi, for example, you can’t use because the latency is really, really high, a lot of interference, with WiGig you don’t have that. It’s not only the WiGig. We count everything, including the codec, because it’s not only the wireless. We say it’s less than 7ms that we add.” 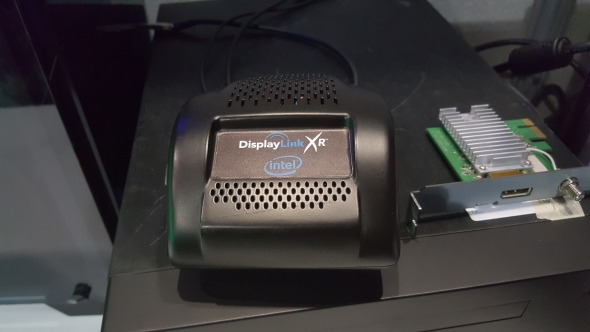 My only real issue with the setup came as a result of the tiny, ceilingless carboard ‘room’ I was in on the show floor. With a pair of Vive’s lighthouses at either end of the meeting room as soon as anyone stepped in front of it tracking skewed off and nearly took my stomach with it.

And that genuinely was the only issue, which is mighty impressive for a device which looks so damned cobbled-together. Once the wireless tech is built into the headset itself, likely with a smaller battery and a shorter operational life, the waggliness will go and it’ll end up a much slicker device.

We’re really starting to see the formative stages of the next generation of VR headsets right now. With already genuinely impressive wireless technology ridding you of the wires, and the Tobii eye-tracking I’ve also played around with at the show, Vive 2.0 is taking shape. 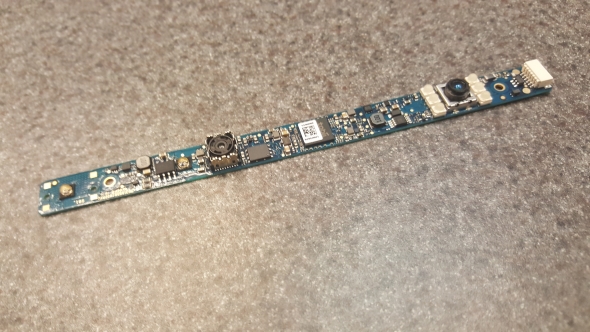 The Tobii tracking may not sound like much, but it’s the same tech that allows you to aim at baddies with your eyeballs in Agents of Mayhem, and shift your field of view in Elite: Dangerous. It’s going to make interaction in VR a very different thing. Suddenly, avatars are not just painted dolls, they have blinking eyes which actually look into yours. They suddenly come alive.

Tobii have their own Vive prototype, with eye-tracking tech built on top of the optics in the headset. I found it a little janky, but that’s down to a mixture of my wearing glasses and the fact I’ve got squinty, piggy eyes. The prototype device found it hard to calibrate my eyes and lost tracking more often than not.

But the potential is certainly there, and Tobii’s previous experience in the eye-tracking game has me confident they’re best placed to make it into the next-generation of VR headsets.