The Intel Core i7 9700K is a weird Coffee Lake processor, but that doesn’t seem to be stopping it from offering a 20% multi-core performance boost despite having only two-thirds the thread-count of the Core i7 8700K.

Why is it such a weird chip? Well, it’s the first Core i7 I can remember that doesn’t have HyperThreading enabled, which is generally what differentiates them from the Core i5 range. Intel has taken the decision to artificially hobble the new Coffee Lake i7 by turning it off so that the Core i9 9900K can sit unchallenged at the top of the mainstream Intel tech tree.

The 9700K is an eight-core processor and, without Intel’s HyperThreading enabled, it has just eight threads of processing power. That’s weaker than the Core i7 8700K’s 12 threads, and yet the 9700K is demonstrating superior multi-core power despite that. And that’s even more weird.

Sure, it’s got slightly higher clockspeeds – the Core i7 9700K runs up to 4.9GHz out of the box, while the 8700K is limited to 4.7GHz – but the new Intel Coffee Lake refresh is only really offering a modest uptick in single-core performance.

The latest performance numbers for the unreleased 9700K appeared on the Geekbench database yesterday, showing a quite definite performance lead over the CPU it’s potentially replacing. Core i7 8700K benchmarks do differ quite wildly on the Geekbench database, but if we compare the score with another taken today using the same chipset, a stock 4.7GHz boost clock, and the same amount of system memory, then we’re looking at around a 20% boost in multi-core performance. 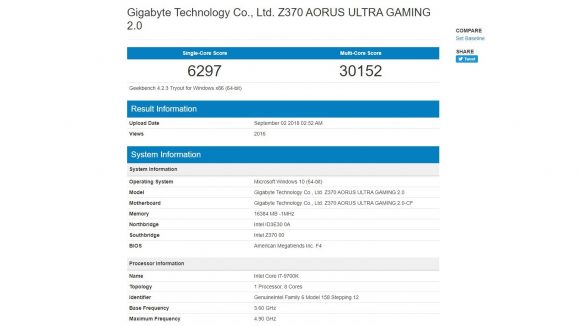 In terms of the single-core performance difference between the two results we’re comparing, the 9700K offers almost 12% better performance. That could be important for the gaming performance of the new Coffee Lake CPUs, and could be a key point of difference when comparing them with the AMD Ryzen competition. 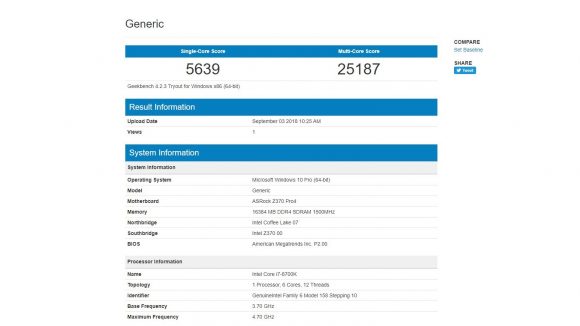 There are recent Geekbench tests, actually using almost identical Gigabyte Z370 motherboards, which show an even greater difference in performance, but as we say, there is a lot of variation in the database as a whole so comparative numbers are a little difficult to nail down pre-launch.

With the new Coffee Lake refresh releasing later this year we’re getting our first taste of mainstream desktop Intel i9 processors, with the Core i9 9900K sitting at the top.

That’s going to be a fully HyperThreaded octa-core CPU, sporting the same eight-core, 16-thread configuration as the AMD Ryzen 7 2700X competition. With the 9900K, and the rather impressive-looking Core i7 9700K, the chances of AMD holding onto its current sales lead is looking a lot slimmer than it did this morning.

But it all depends on how beserk Intel wants to go with pricing on its new chips. One thing we do know is that it can’t afford to go Nvidia RTX 2080 Ti-level nutso on pricing because competition in CPU land is fierce.