Iron Harvest is the game I’ve been waiting for ever since I first saw Jakub Rozalski’s dieselpunk art making the rounds on Reddit. Of course back then there was no sign of an RTS, just the idea that this art, this world that it portrayed, would make for an amazing game. The first foray into that was Scythe, a big box boardgame that solidified some of the characters that reappear in Iron Harvest but sadly didn’t quite scratch the itch. So when the teaser trailer dropped in 2017, I was hyped.

Now that it’s out I can say that it’s… alright. Pretty good for an initial launch release.

As is to be expected from the theme and style, Iron Harvest takes a lot of inspiration from Relic Entertainment’s Company of Heroes. From the layout of maps where players start with a HQ that can produce engineers and basic riflemen to the UI, even down to the minute by minute gameplay it feels like a newer version. As a huge fan of Company of Heroes, anything that recreates that feeling with our modern technology is appreciated. And technologically, Iron Harvest does bring a few new things to the table that outshines its ancestor.

With the focus on huge mechs it’s no surprise that there is a lot of collateral damage, with the largest bringing down bridges and buildings as they charge into battle. And that destruction is wonderfully realised and satisfying. In fact, most aspects of the gameplay are satisfying. Anti-infantry mechs and field equipment tear through enemy soldiers with frightening ease, anti-mech weaponry is loud and the impacts are visually satisfying. Units get launched like ragdolls by explosions and charging with the bayonet wielding rifle mech just feels great. 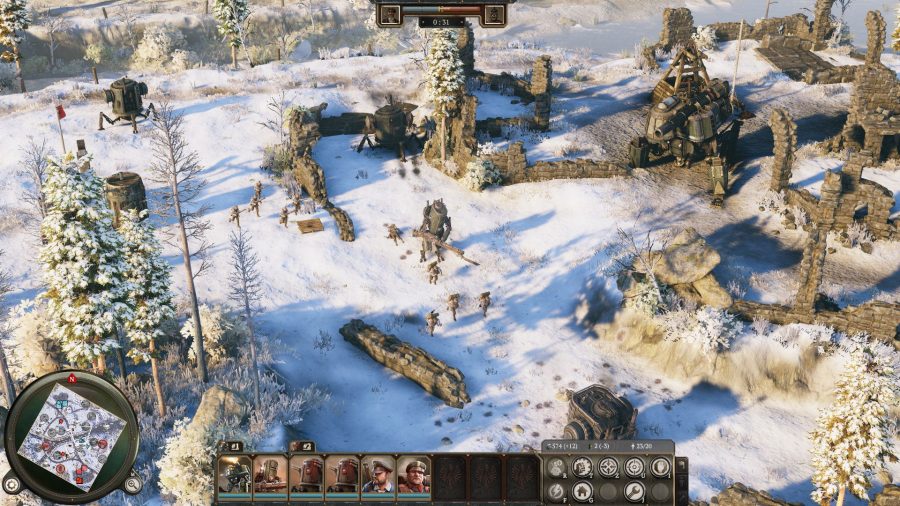 Each faction has their own unique style; the ramshackle hit and run resistance of Polania where soldiers are lucky to have more than a big coat for protection and the mechs seem somehow outdated; Rusviet’s imposing battleship like mechs and shotgun wielding basic troops which are horrific if allowed to get into close quarters; and Saxony’s armoured supremacy which gives them the ability to wade through unprepared defenses. And this variety is interesting because at its core, each faction has the same abilities and unit types. Each faction gets an engineer, a basic soldier, grenade throwing unit, flamethrower, machine gunner, medic, and anti-mech infantry. Where these differences come in is in the mechs, heroes, and faction unique exo-suits which keeps the factions balanced but varied enough to have their own identity.

All the infantry heroes get pets like bears, tigers, and wolves.

Speaking of heroes, it’s refreshing to see that each faction has male and female heroes and that all the infantry heroes get pets like bears, tigers, and wolves. Less refreshing though is the voice acting and that in a world where every faction (including those from Scythe) seems to have a female hero the story still feels the need to push that constant ‘girls can’t be soldiers’ narrative. The first mission of the campaign puts you in the snowboots of Anna Kos as she has a snowball fight with a bunch identical looking older boys who refuse to let her play because “girls can’t throw”. From here the campaign progresses as a painfully long tutorial with some dire voice acting as Anna’s older brother PlotPoint McDiesel immediately teaches her how to hunt (hero powers), her village gets attacked by the Rusviets (moving units and fighting), some captured resistance members need saving (unit types), and eventually base building after around two to three hours of marching units back and forth.

This is a shame because the underlying story seems incredibly interesting. The Factory where alternate reality fan favourite Nikola Tesla invented some new and amazing power which could revolutionise the world and win the war for whichever side controls it sounds like a cool storyline. Sadly though, the story beats feel off and every early mission ending with Anna getting rescued by a male relative really kills the potential. 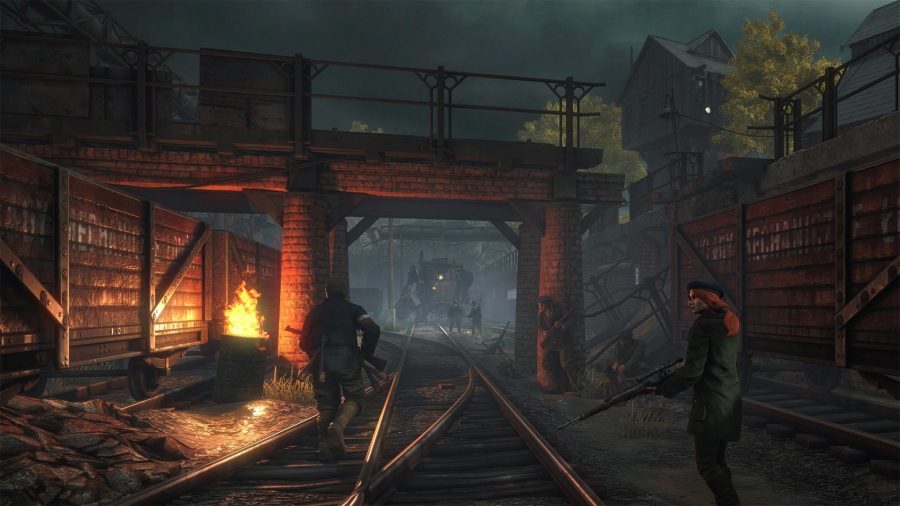 But who needs story in an RTS? The multiplayer, skirmish, and challenge modes provide the real meat of the experience. And thanks to a forgiving matchmaker multiplayer games are relatively quick to enter and don’t end as soon as someone drops from the lobby, which is very appreciated.

The neat benefit of these is that it allows you to further customise your playstyle beyond the base strengths of your faction.

Skirmish and multiplayer let you choose from each of the three factions, aligning yourselves regardless of in-world lore. Before each match players choose their hero and spend points on infantry and mech units to serve as their ‘reinforcements’ that they can unlock over the course of the game. The neat benefit of these is that it allows you to further customise your playstyle beyond the base strengths of your faction. Mortar crews and long ranged mechs, flamethrowers galore, or even just an infantry rush, how you spend your points can really change how a match unfolds and creates a sort of higher level strategy as you get to see what your opponent’s reinforcements will be and have to plan accordingly.

For fear of sounding like a broken record, Iron Harvest’s multiplayer and skirmish modes are, again, reminiscent of Company of Heroes. With oil pumps, iron mines, and victory point flags dotted around the map, you’ll have to expand quickly, capturing these resource production zones and protecting them until one of you hits the victory point limit. Which, for most maps, forces a three pronged attack and defense as you fight over the central flag and the two corners. Destroying your opponent’s HQ is an option but sadly not the focus. Which might be for the best considering some of the gruelling stalemates Company of Heroes could end up in. 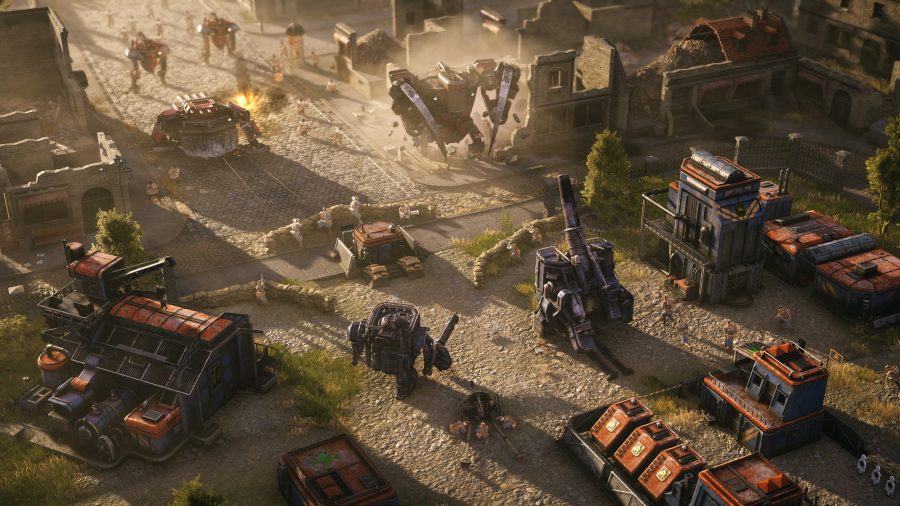 The challenge missions are a bit more interesting as they have a bit of narrative to them and change things up from the standard fare. Defending an elevated base from an oncoming Rusivet army as they attack from all sides, desperately trying to run out the clock and winning purely because a lone medic survived, is an enjoyable experience. And with the game giving you a score based on your performance, it has a decent measure of replayability which is handy considering there are only a handful of missions available so far.

Related: Check out the best RTS games on PC

That last bit being the keyword as Iron Harvest has announced their road-map which includes new maps, modes, cosmetics, and various other post-launch content that has become par for the course. But the most modern aspect of Iron Harvest, the part that, like Marmite, might be met with love, hate, or distant indifference is that the game has ‘seasons’. That new fangled idea that players must be lured back in with time sensitive content, portraits, frames, banners, and even unit skins to be unlocked by completing challenges such as ‘play 5 multiplayer matches’. If that’s your thing, great, it’ll give you reason enough to keep playing and keeps the servers healthy. If not, don’t worry, the rewards are quite naff anyway.

So that’s Iron Harvest as it stands. A decent RTS that takes the core feeling of Company of Heroes and improves it with mechs and modern graphics. And while the quick match function may sometimes throw you to the much higher level wolves, there’s enough in here to scratch that strategy itch and plenty of (blech) encouragement to play frequently.

A pretty decent start to Iron Harvest's RTS journey. Lacking some much needed additional content and the campaign could be better, but there's a solid foundation here.