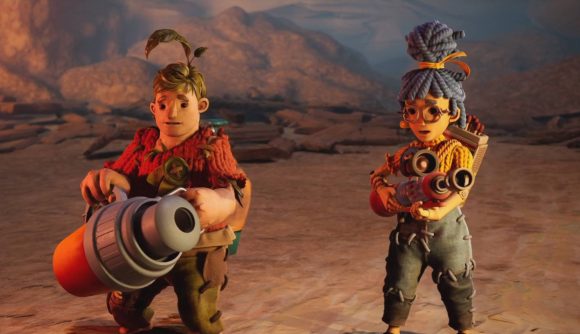 It takes two people to play It Takes Two, a game so dedicated to co-op that it can only be played if you have a partner. It Takes Two launched as the best-reviewed game of 2021, and it’s slowly been growing in popularity over the past few days. It made the Steam top seller charts this week, and it’s reached a peak of over 36k concurrent players, half of which are playing for free.

Like developer Hazelight’s previous take on co-op games, A Way Out, It Takes Two offers a free friend’s pass, meaning that if you own the game, you can invite anyone to join you without making them pay for a separate copy.

Earlier today, It Takes Two reached a peak concurrent player count of 21,567, as SteamDB shows. The friend’s pass – which Steam tracks as a separate app – reached a peak of 15,872 players at the same time. That makes for a total player count of 37,439, which would put It Takes Two among Steam’s top 30 most-played games today. The only caveat is that half of those players are getting to enjoy the game for free.

“I’m actually very surprised that you don’t see more co-op only games, and I would love to see more games like this one,” director Josef Fares tells us in a recent interview. “Co-op games are underestimated from a creative perspective, it allows you to make really great stories and mechanically cool experiences.”