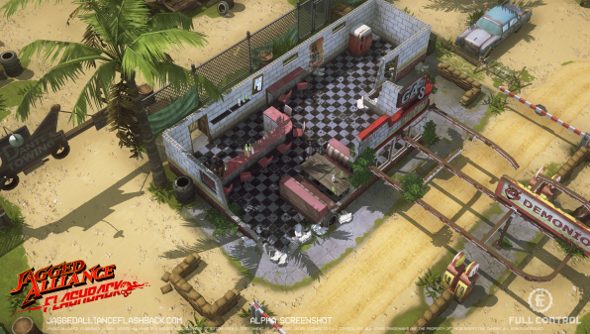 It’s been almost a year since Space Hulk developer Full Control successfully Kickstarted a faithful sequel to the Jagged Alliance tactics series. Since then, Space Hulk was released, and it wasn’t great, but here’s hoping that this particular resurrection fairs betters. Backers will find out soon enough, as Jagged Alliance: Flashback enters closed alpha.

Flashback will also be hitting Steam Early Access soon, in Q2. The Danish studio wants to reset the franchise, bringing it back to its roots, unlike 2010’s uneven Back in Action reboot.

“We are happy to announce that Jagged Alliance: Flashback is finally in Alpha, with Steam Early Access close on its heels”, says Full Control CEO Thomas Lund. “Fans of the franchise will be excited about the return of the beloved turn-based action of the original game, and we can’t wait to get feedback from our Kickstarter backers and the rest of the community when Early Access on Steam begins. So go ahead, talk to us! We want to make this game as great possible for the fans of the franchise, which is also why we have chosen to focus heavily on the modability of the game.”

The game is set in the late ‘80s, on a fictional island in the Caribbean. The corrupt dictator, “The Prince”, is crushing the island under a steel fist, destroying a burgeoning rebel group and reasserting his control. The player-controlled team is sent in to rescue the rebel leader, but things, apparently, do not go according to plan.