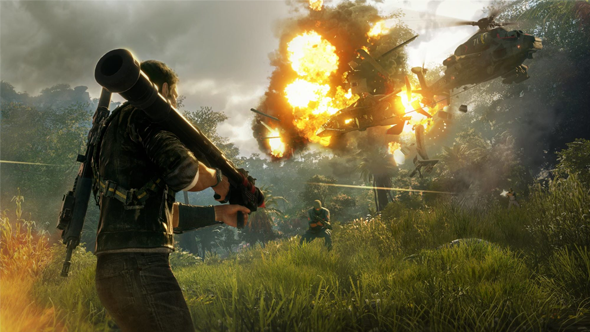 You have a new tool in Just Cause 4 called the ‘airlifter’. It’s a little like a limpet mine that, instead of exploding, inflates a large balloon, making anything it’s attached to float – though, larger objects will need more airlifters before they head to the sky.

There are a few limits to what you can attach these devices to. So you can make boats, heavy gas cannisters, and… oh my – I realise now that I have never wanted a game to include pigs more than this. I want to make pigs fly.

The airlifters look a little like Fulton Air Systems, the balloons you could use in Metal Gear Solid 5 to airlift personnel and equipment.

Can’t wait for Just Cause 4? Here are the best sandbox games on PC.

“Actually, you can do more than that, because you could attach one barrel to the airlifter, and then that barrel to another barrel, and then what you have is a cloud of red barrels. You enter into your enemy’s base, shoot one barrel with a sniper rifle: BOOM.”

You can see the airlifter in action in the footage below (skip to 2.40):

It was only announced at E3 but we aleady know Just Cause 4’s release dateand a ton of details about how it will play – though, that’s largely because it’s a sandbox we’ve spent a lot of time in across the series. The grappling hook is returning, as is the wingsuit, and tethering objects together is still a great way to while away your time.

The big addition to the series with Just Cause 4 are the new weather systems that see destructive tornados carving their way across the land.