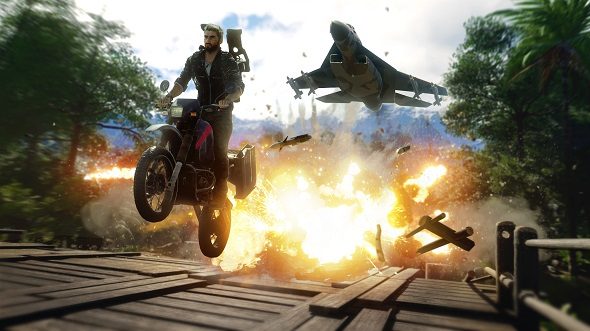 Despite the success of the Just Cause 2 and Just Cause 3 multiplayer mods, which even got official endorsement by Avalanche Studios and Square Enix, the game’s creative director Franceso Antolini confirmed to us that “Just Cause 4 will not feature multiplayer.”

The news might come as a surprise as Avalanche hired the lead developer of the Just Cause 3 multiplayer mod team back in 2016, around the time Just Cause 4 was going into full development.

Turning Just Cause into a multiplayer game must be an incredible challenge, you’re able to tether together strings of objects – many of them explosive – and launch them through world, watching them physically interactive with everything they encounter. The physics calculations on that must be a struggle with only one player causing chaos, let alone multiple.

While we wait for Just Cause 4, you should check out the best sandbox games on PC – a list which I’ve my fingers crossed Just Cause 4 will become a member.

Looking at Avalanche’s current slate of games – Just Cause 4, Rage 2, theHunter: Call of the Wild, and Generation Zero – it appears the multiplayer mod developer Cameron Foote must be working on theHunter or Generation Zero, which are both multiplayer games.