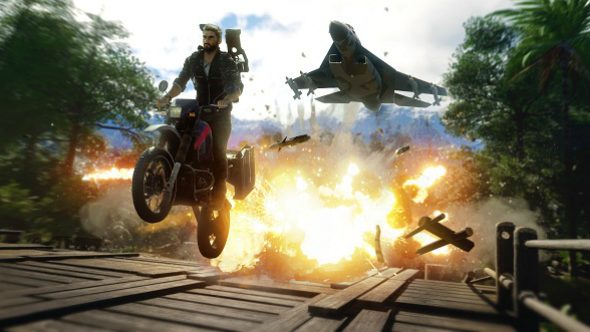 If you’re anything like me, you might have found that Just Cause 3’s wingsuit could be a little difficult to steer at times. I found myself regularly slamming face-first into the Medici soil but it was nothing to do with my own ineptitude. Whatever the reason for your personal aerial challenges, Avalanche might have found a way to help you out in Just Cause 4.

We already know that Just Cause 4 would have extreme weather, but it seems that Avalanche has put more subtle systems in place as well, with simulated wind patterns circling the entire map.

Just Cause 4 could prove to be one of the best sandbox games on PC.

In an impressions piece based on an E3 demo, Game Informer’s senior associate editor Jeff Marchiafava, says that “the entire island has simulated wind patterns, which make getting around with Rico’s wingsuit a little easier.”

I imagine they exist to offer players some improved level of momentum, especially when attempting to cover long distances with the wingsuit. I found that while getting around Just Cause 3’s map was fun, it did occasionally take longer than I would have like to get from place to place under my own power, so some wind at my back seems like a good solution.

You can check out the trailer for Just Cause 4 below:

The Just Cause 4 release date is December 4. The Just Cause 4 map features more than just ambient weather, as blizzard, sandstorms, lightning, and even tornados will carve across the the game’s fictional South American setting of Solis.