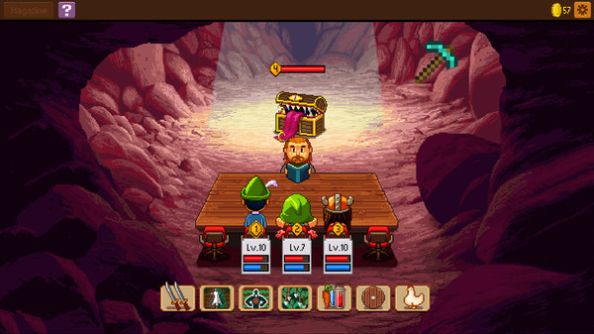 Knights of Pen & Paper 2 is another turn-based RPG from KYY Games in which the action unfolds just beyond the bearded head of a Dungeon Master, as if conjured from his imagination. It looks pretty cute, and you’ll find it on Steam about now.

Paradox are publishing again, funding a number of new in-game races, feats, randomly generated dungeons and “more jokes and humour than you can fit in a bag of holding”. Yep: this is a game best enjoyed by those fluent in the tropes of tabletop adventure – but playable by anybody with even a passing interest in turn-based tactics.

Fancy a more straight-faced adventure? Try one of the best RPGs on PC.

It’s been out on mobiles for months, but finally the PC is privy to this “game where you pretend to be adults, pretending to be wizards, like nature intended”.

The new version is $9.99 or £7.99 on Windows, Mac and Linux, and incorporates support for gamepads, keyboards and their attendant mice. The story expansion ‘Fist of +1 Fury’ is included.

Let’s hope 1080p and 60fps will make this sequel feel like a real PC game. The short-burst battles of Knights of Pen & Paper +1, though they delighted on mobile, felt underdeveloped on our monitors. Think you’ll try this one?