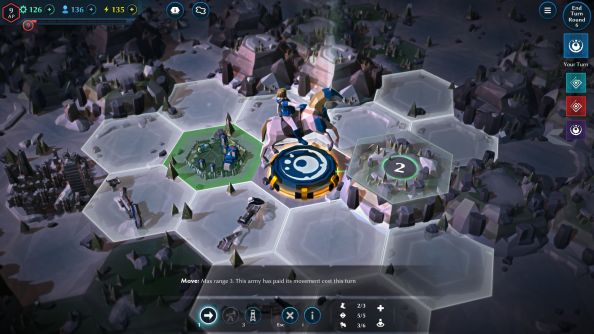 The sun is dying. Thankfully, the remnants of humanity now clinging to the equator live turn-by-turn, so they’ve got as much time as they like. But they’re preoccupied, squabbling with robotic Automata over the last natural resources using armies decided by decks picked before battle.

Looking for a little 4Xtra? Check out list of the best strategy games.

Auroch Digital have form with board and card games, having spent the last couple of years transposing Games Workshop’s Chainsaw Warrior and Dark Future to PC. Now they’re working with newcomers The Wintermute Company to build on one of the better digital board games in recent times: Vic Davis’ Armageddon Empires.

“We’ve taken AE as our starting point, but we’ve made a game that significantly evolves Vic’s original design and dramatically updates the UI, all while remaining respectful of our inspiration,” write the developers.

“This isn’t an Early Access game where you’re waiting for it to get fun – we think it’s already exciting and interesting to play, and it’s just going to get better. We’ll be delivering big, meaty updates on a regular basis.”

The plan is to make use of Steam Early Access from the beginning of next year, and launch Last Days of Old Earth 1.0 in the spring. The initial version features two factions for an AI and multiplayer skirmish mode, and the finished one will stretch to a single-player campaign with over 50 units and a focus on stealth, sabotage and hero assassination mechanics.