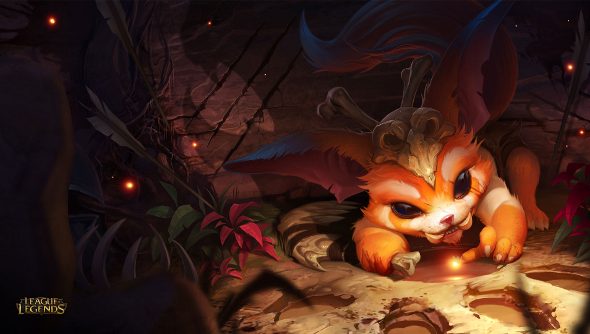 Jeremy was not far off when he compared League of Legends newest champion, Gnar, to a Gremlin earlier today. The wee beastie has been fully revealed by Riot, and yeah, he’s basically a Gremlin.

Just bigger and meaner. Like a Gremlin warped by gamma radiation.

“Time marches on for most, but not Gnar. A yordle born millennia ago, Gnar was captured and trapped in true ice, frozen – quite literally – in time,” the lore explains. “Civilizations formed and fell as the prehistoric yordle vacantly stared on, but nothing – not even true ice – could confine Gnar forever. After breaking free, he wandered Runeterra until he found himself taken in by his yordle descendants. But, as they would soon discover, there’s a beast behind the boy.”

And what a beast. The adorable little creature is a transform champion, with his Mini and Mega forms having different and distinct strengths and weaknesses.

Mini Gnar is a bit frail, and to transform into his large, tanky Mega form takes time, as it requires his rage to build up. The wee fella can pester enemies from range, slowing and damaging them with his boomerang while maintaining a safe distance.

But when he gets angry, well, you wouldn’t like him when he’s angry.

Mega Gnar is a slow, powerful juggernaut with crowd control abilities and burst damage. He likes to be in the fray, but until Mini Gnar, doesn’t have a way to escape when things get too hot.

An interesting quirk is the need to anticipate Gnar’s transformation. It can’t be controlled by the player, simply happening when his rage meter fills up.

Here’s the central question we posed ourselves: how can we create a new transform champion that feels fundamentally good to play as and against? Our answer was to make a champion with identifiable strengths and weaknesses in both forms, then limit the player’s ability to control which form they play in,” explains designer August Browning. “After months of testing, we ended up with the (sometimes) adorable ball of fluff known as Gnar.”