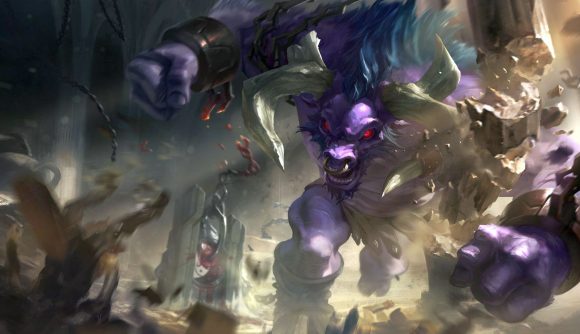 Hot on the heels on Riot’s preview for the upcoming League of Legends patch 11.7 on Twitter, a bunch of balance changes have dropped onto the multiplayer game’s testing grounds. There are a whole bunch of champion and item changes coming up next week, but some notable tweaks are hitting League of Legends champions Alistar, Braum, and Kindred – and possibly Yorick, too.

While the changes aren’t too major, details on the buffs and nerfs coming up are worth bearing in mind for when the patch goes live. First up, vanguard champion Alistar is in for nerfs to two of his abilities, going by what’s getting tested o the PBE so far. As of writing, the champ’s Q, Pulverise, is seeing its damage dropped at most levels – it’s currently sitting at 60/100/140/180/220 which is down from 60/105/150/195/240.

Alistar’s E, Trample, is also in for a nerf next patch. The additional damage dealt when at five stack has been dialled down to 20-275, where it was 35-290 previously. This should help move the champ towards a more balanced state given his recent success in solo support, with the good minotaur having secured a recent win rate of 51.09% in the role (and a pick rate of 15.45%) going by OP.GG’s stats.

A few things may still change but most of the directions are here. Yorick was overdue for some of this work for sure. pic.twitter.com/8zjSy7WswJ

Last up, some key gameplay changes for fighter champion Yorick have been noted in the patch preview – which you can check out in the tweet above – though game designer Kevin ‘Captain Gameplay’ Huang has noted in the replies that the “Yorick tower aggro logic is unlikely to be in for this patch”. The Yorick changes haven’t hit the PBE just yet, so we can’t be sure what’ll ship with the update next week, but keep checking back on our League of Legends patch 11.7 notes to find out.