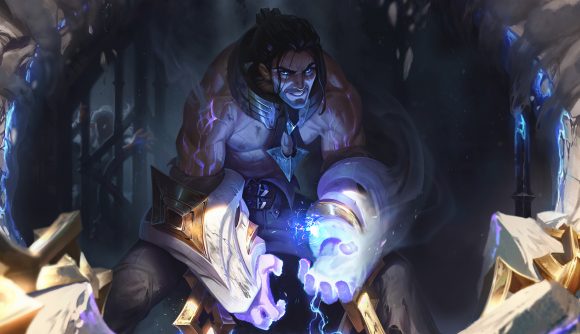 The next champion to join the League of Legends roster is Sylas the Unshackled. After the usual set of teasers last week, Riot officially lifted the veil on Sylas today, detailing what he’s about and what to expect from his in-game abilities. Read on for further detail, but the most notable detail is this: he can steal ultimates from other heroes.

Sylas is a crowd control mage who lashes out with spells and chains. His Q, Chain Lash, damages and slows enemies, and the intersection of those chains applies bonus debuffs and damage after a brief delay. Any time you cast a spell, the passive Petricite Burst will add a whirling chain to your basic attack for damage in a wider area.

Abscond gives you a quick dash and shield to get out of trouble. For a brief time after casting, you can recast it as Abduct, which lets you attack an enemy and zip to it for follow up attacks. Then there’s Kingslayer, a lunging strike that damages an enemy and heals you – if you’re at low health, you get bonus healing, and if the enemy’s at low health, you get bonus damage.

Then there’s Hijack, which lets you steal enemy ultimates. In the late-game, you’ll be able to quickly steal multiple ults to basically turn a team’s power against itself.

You can find more details on how this all works at the official site, or see it in more dramatic fashion through the trailer above.

Related: Pick from the best MOBAs

Riot’s new champion teaser gave us some hints about what to expect – which were just enough for some folks to pick Sylas out as a likely new candidate. What we’ve still yet to find out is how exactly this ult steal ability will manage to be balanced.