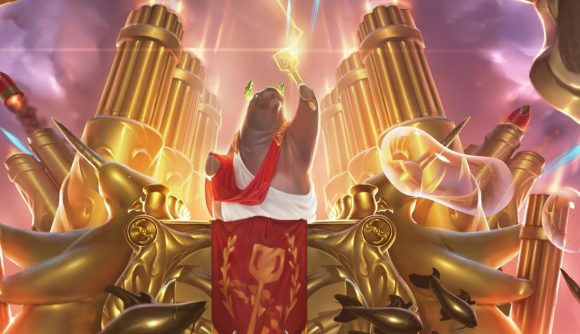 League of Legends could soon be getting a new dragon. Earlier today, one of the game’s senior designer, Riot Mort, posted an image of the new drake to Twitter, and it didn’t take long before players noticed some similarities to another famous LoL figure.

The dragon is a powerful monster lurking in a cave near the centre of Summoner’s Rift. There are four variations – Mountain, Cloud, Infernal, and Ocean – each of which offer a different buff to the team that slays it. Once the dragon has been defeated, it’ll respawn some minutes later, allowing players to improve their pre-existing buffs or add another to their collection, depending on which dragon has arrived.

The dragon in Mort’s tweet, however, is neither any of the aforementioned dragons nor their powerful friend, the Elder Dragon. Instead, this monster’s rocking a fancy crown, some blue wingtips, and a spatula-shaped tail. That final detail, in particular, will point long-term League of Legends fans towards Urf the Manatee, suggesting that something involving the game’s most beloved champion could be on the way.

Urf is an April Fool’s joke from the early days of League of Legends. The champion was a sentient manatee who wielded a spatula, and who was murdered by Warwick during his first day on the Rift. Plenty of skins now reference the character, and he’s even been honoured with his very own game mode, Ultra Rapid Fire.

Good Morning! Time to get back to work and…wait what the heck is this?! pic.twitter.com/dw043bp1P9

That game mode is likely what this new dragon is all about. In development terms, we’re not all that far away from the end of March, by which time any April Fools’ joke would need to have been put together in its entirety. The symbols on the corner of the cave could point to a new, randomised element attached to whatever that event could be, but we’ll have to wait and see.

Until then, you can keep up to date with League of Legends patch 9.1. It’s been a longer update period than normal, so there’s no harm in making sure all of your League knowledge is as accurate as possible.