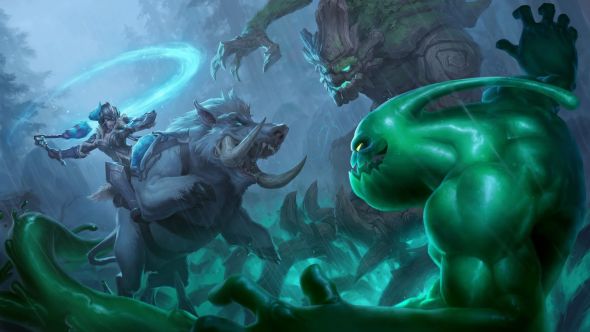 The absence of voice chat in League of Legends has been a sore point for a while. To some, it presents an unnecessary obstacle to coordinating a team, especially when matched with strangers who aren’t in your party’s Discord channel. To others, it offers sensible relief from vocal abuse by whingeing children. Either way, though, it looks like Riot are reconsidering their position.

Decide which MOBA’s community should abuse you in our rundown of the genre.

The news comes from a reply in a Q&A session by Riot Korea, which was translated and posted to Reddit by user Calycae:

“Previously we worried that voice chat would lead to toxic behaviours, but after rethinking, we ultimately decided to provide an in-game voice chat feature.

“League of Legends promotes team-sport oriented teamwork, and we think that voice chat brings value to when players are matched with random players, so we are reviewing the feature at the moment.

“After the game client update has been applied, we expect concrete plans and preparations to be possible.

“It is difficult to say exactly when, but we would like to let you know that we are working progressively on bringing this feature ready and working.”

This implies that the feature has been confirmed, which is perhaps why community manager Runeterra then said thisto Korean site Inven:

“Voice chat is being internally reviewed very positively, however it is not something that has been confirmed.”

Design director Greg ‘Ghostcrawler’ Street mentioned voice chat on his Tumblr back in February, saying “I always answer this by predicting that we will add integrated voice at some point”. It hasn’t been a priority for Riot, though, because “players who care about voice comms do have a lot of third-party solutions that work for them, and in fact, we would have to make sure a first-party voice solution had superior features to those more generic solutions to really justify players switching over.”

League of Legends is currently going through patch 7.10 on the PBE.