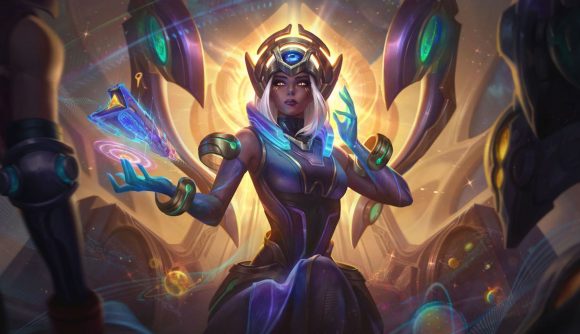 December 18, 2020 Riot Games has confirmed to us that there is indeed a League of Legends MMO in the works.

Around this time last year, League of Legends developer Riot Games announced its flagship MOBA game’s IP would be expanding, with other titles on the way set in the LoL universe. Now, we’ve got an idea of what one of these new titles will be – an MMO set in the world of Runeterra.

Greg Street, vice president of IP and entertainment at Riot, has posted on Twitter: “I have news!”, explaining his “recent job at Riot has been to help develop the League universe, which we’re going to need! Because it is time. My new job is to kick off a big (some might say massive) game that many of you, and many Rioters, have been asking us to create.” Street then adds that the studio’s hiring in the post.

It’s far from clear in the post itself what this “big” (or “massive”, even) mystery League project might be, but in the post’s replies, one commenter asks if it’ll be an MMO. “It is an MMO,” Street – who was previously lead systems designer on World of Warcraft – confirms in reply.

We reached out to Riot Games and a studio representative has confirmed the above – there is a League of Legends MMO on the way.

Aside from these morsels, there isn’t any information about the MMO for fans to devour just yet. Taking a peep at Riot’s careers page as of writing doesn’t appear to reveal a working title or any roles open for the upcoming multiplayer game which might give us an idea of the project.

My recent job at Riot has been to help develop the League universe, which we’re going to need!

Because it is time. My new job is to kick off a big (some might say massive) game that many of you, and many Rioters, have been asking us to create.

However, it looks like fans imagining the universe of League crossed with the format of the biggest and best MMOs and MMORPGs have good reason to start getting excited.

It is an MMO

This new MMO marks just one of a bunch of new titles released or on the way set in the League of Legends universe. Last year, the studio launched its Runeterra-set autobattler Teamfight Tactics, and since then it’s released Legends of Runeterra – one of the best card games on PC, we reckon – and there’s also turn-based narrative RPG Ruined King: A League of Legends Story on the way sometime in 2021.