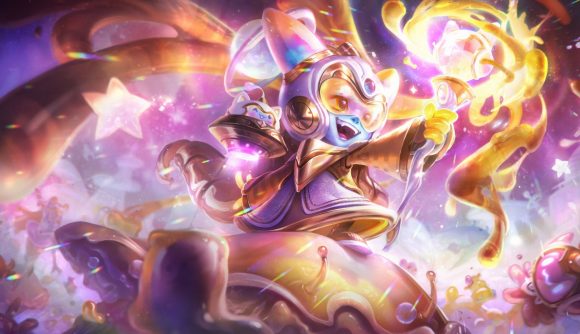 Riot Games has revealed that four more lucky League of Legends champions will be getting prestige skins over the coming year. However, the studio’s plans – unveiled in November – to overhaul its flagship multiplayer game’s prestige system are being postponed for now.

In the original November post, Riot broadly outlined its plans for League’s prestige system, which included “streamlining the rules around rare and exclusive content” and retiring prestige points (which are used to redeem prestige champion goodies). It also decided that, rather than create a new pool of prestige points this year, it would instead extend last year’s window and give players some extra options to pick from in early 2021.

The initial list of 2021 prestige skins in that post included champs such as Lulu, who is getting hers (a Space Groove skin) with the upcoming League of Legends patch 11.7, as well as Fiora, Leona, and some ‘TBDs’. Now, Riot has confirmed that Sylas and Pantheon are getting event prestige skins, and Conqueror Jax and Zed (the latter “for a previously released skin”) are in for prestige point skins in 2021. So, exciting news if you main any of these champs and ae the lookout for a shiny, rare new look for them.

Unfortunately, however, Riot has said its overhaul of the prestige system – which was initially planned for “around the middle of 2021 (pending any setbacks)” – will be coming a little later than expected.

“Unfortunately, we won’t be able to meet our originally announced timeline,” product manager Ken Adams explains, “but are still aiming to land this update later in the year. That means your Prestige Points will be usable on even more skins, so we’ve expanded the list of champions receiving one.”

The dev adds that if the timeline shifts again, the studio will let players know, but otherwise it’ll be sharing more details on the rare and exclusive content overhaul “in a few months”. Before that, you can check out our League of Legends patch 11.7 notes to get a peek at Lulu’s new prestige skin and the changes headed to the game in a couple weeks’ time.