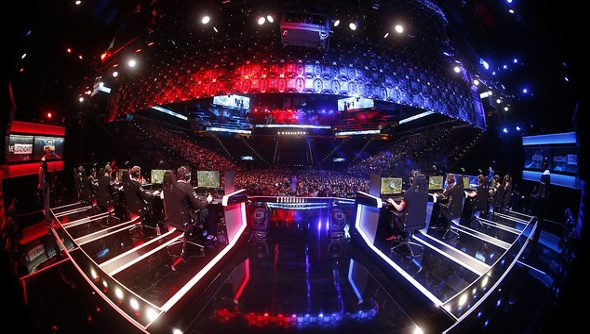 Korean League of Legends may have just suffered its most serious defeat since Worlds 2012. At the Mid-Season Invitational in Tallahassee Florida, in a five game series, China’s EDward Gaming defeated the vaunted SK Telecom team for the Invitational title.

You couldn’t even call it an underdog upset. EDG were in control of the series from the start, forcing SK to change mid laners late in the series and play catch-up to force a game 5. EDG made a convincing argument that China has well and truly arrived on the summit of League of Legends eSports.

When the gods wish to punish us, they grant us our prayers.

Going into deciding game of the championship best-of-five between Korea’s SK Telecom and China’s EDward Gaming, EDG finally let SKT and the crowd at the Donald Tucker Civic Center have what they wanted: a LeBlanc pick for SKT’s mid laner, Lee “Faker” Sang Hyuk. LeBlanc was the living legend’s deadliest weapon, a champion with which he had never lost a professional game.

SKT hesitated over the pick. They weren’t sure they wanted to commit their midlane pick yet. The portrait flickered as SKT went back forth over the pick. After a long pause over LeBlanc, Annie flickered into view. Then, at last, SKT locked in LeBlanc. The crowd went wild, ready to crown SK Telecom the Mid-Season Invitational champions right there and then. Faker had his LeBlanc, and nobody had ever beaten it.

Looking back on that moment, I think SK Telecom knew it was a trap. They’d hesitated both because it was too good to be true, and because EDG still had flexibility with their next picks to counter-pick around Faker. But throughout the weekend, SK Telecom had made odd decisions at some key moments, accepting challenges when they didn’t need to. There had been moments in the Fnatic series when they seemed driven more by pride than good sense, taking fights at dragon that they had no business taking just so they could demonstrate that they were still in control of the match.

Now, at the key moment, they picked up the gauntlet from EDG. You think you can beat Faker’s LeBlanc? Fuck you.

It wasn’t just about SK Telecom and EDG, either. Faker was playing against Heo “PawN” Won Seok yet again, the rival midlaner who has given Faker more trouble than anyone else in his career. He won a world title with Samsung last year, and has shown an uncanny knack for beating Faker in particular. He is a better mid lane player than Faker is right now, and arguably a better mid laner than Faker, period. So when the chance came for Faker to put Pawn in his place, and lead his team to a world title on the back of a signature Faker performance, he jumped at it.

He almost made it work, but EDG’s aggressive early game pressure once put SK Telecom on their back foot yet again, forcing them to hope for late-game scaling to give them the teamfight dominance they were unable to seize for themselves. As Fnatic had so ably demonstrated, SK Telecom aren’t a team that comfortable with lots of early fighting and pressure, and are used to pulling ahead thanks to late-game compositions and their own mechanical perfection.

But EDward had done a lot of damage to SKT before their characters started to scale, knocking down most of SK’s towers and putting the team under a close siege. Despite a series of fights where SK seemed on the cusp of turning things around, EDG avoided the ace that SKT were so desperately seeking. In the end, with map control ceded to EDG and the Chinese team about to take Baron, Faker was forced to lead his depleted team out to contest the Baron, went too deep, and died along with his team’s hope for a victory.

With that Game 5 win, EDG had not only secured for themselves a $100,000 grand prize, but they had slain the Korean dragon that’s dominated League of Legends for the past two years. China, after years of playing second-fiddle to Korea when it came to eSports, has finally wrested a major title out of Korea’s hands.

EDG quickly established that they won’t be following the standard, Korean corporate script for winners, either. There was no false modesty or polite, detached respect for their defeated opponents afterwards. Asked at the winner’s press conference what he thought of their prospects for Worlds, PawN responded by saying, “I think if other regions are still this bad [at Worlds], we can win Worlds as well.”