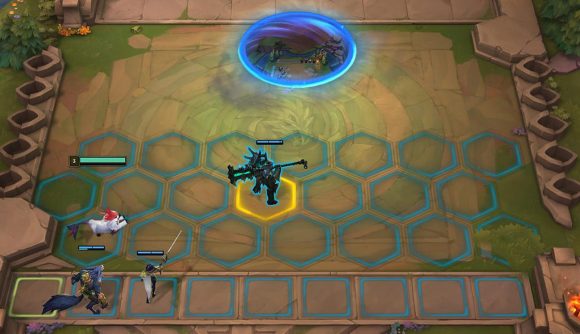 Teamfight Tactics is getting out to League of Legends players in the very near future – barring any development mishaps, you’ll be able to dive in as of June 18 on the PBE, meaning that it’s a very big week for official takes on the Auto Chess concept. Dota Underlords went out to Battle Pass owners last week, and now Riot has brought us a bunch of TFT gameplay footage through a number of League streamers and YouTubers.

Riot is calling its own Teamfight Tactics mode an ‘autobattler,’ but if you’ve played any variation of Auto Chess in the past, you already know what to expect – Riot’s designers even mentioned Dota Auto Chess by name in the mode’s announcement, so they’re not being coy about what they’re making.

In short, you recruit recognisable League champions to your team by spending gold between rounds, you’ll combine duplicates to get more powerful units, and then you’ll position your units and watch as they do battle against teams positioned by other players.

Riot’s Ed Altorfer tweets that the mode is scheduled to hit the PBE tomorrow, and that it will properly go live during patch 9.13.

If you’re looking for gameplay, you can get it from Scarra.

Read more: Check out all the best MOBA games

Qiyana is the big addition to proper League of Legends in 9.13, and you can follow that link for details on all her abilities. Whether you’re in for a new take on Auto Chess or more traditional MOBA play, this next patch promises to be a big one.