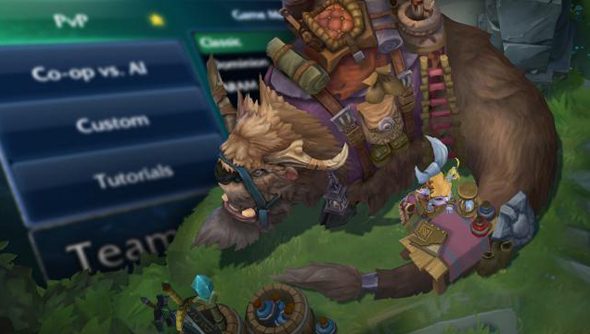 “What good is a spiffy update if your toaster explodes during loading?”

That’s the question Riot’s engineering team have been asking themselves while developing the new League of Legends update for Summoner’s Rift. They’ve made it their mission (as well as their jobs) to ensure that the new map runs at least as well on bog-standard machines as the old Rift.

The Summoner’s Rift update is the baby of Riot’s art team – and keeping test PCs happy has been a matter of feeding those artists the right tools and information from engineering.

“The art team’s goal of increasing visual fidelity while maintaining performance parity with pre-update SR meant they needed a minimal set of highly-optimized features that would then allow them to create a hand-painted map,” wrote Riot Aeon. “Essentially, this meant the engineering team needed to build a new, high performance renderer from scratch.”

The new Summoner’s Rift renderer is simpler, and gives Riot greater control over how older video cards build the game’s environment. The plan is that the visual upgrade will lead to better performance on ageing machines, not worse.

Lower-spec machines will also benefit from a cut in polygon count to all areas of the map. Jungle creatures in particular will enjoy a newly-minimised bone structure – they’ll animate more simply, and the game will slow less frequently.

Finally, Riot have been working with a method of combining multiple textures into one, dock-off texture. They can then be compressed or expanded according to the level of detail required – which is apparently another great way of conserving memory usage.

“We’ve been vigilant for any opportunity to optimize,” said Aeon. “From the outset, toaster compatibility has been one of our top goals with the update, and it’s something we’ll continue to keep an eye on and fine tune as we move towards open beta and beyond.”

Let’s hope the map launches that way. Have you seen what the new Summoner’s Rift update is doing for map clarity? It’s going to change how people see the game, in more than one sense.