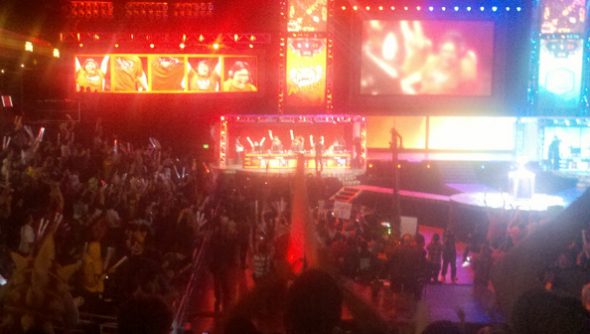 Underneath a small galaxy of LED spotlights, with the silver Summoner’s Cup sitting tantalizingly close at center stage and shining like a diamond, Taiwan’s Taipei Assassins and Korea’s Azubu Frost met on the main stage of USC’s Galen Center to decide a million dollar prize and the Season 2 League of Legends world title.

Somewhere around 10,000 League of Legends fans packed into the arena, wearing Teemo hats and carrying signs with League of Legends inside jokes scrawled on them. “Jax walks into a bar… but there’s no counter” and “Asians OP”, for instance, and after this tournament, you’d find few who didn’t agree with the latter sentiment. Even within League of Legends, these two teams (and the pro-gaming cultures they represented) were in a league of their own.

The true cost of Azubu Frost’s (AZF) cheating scandal became clear during the team introductions. Their subdued welcome from the crowd was washed-out by the deafening cheers and chants for Taipei Assassins (TPA).

With the crowd on their side, erupting into deafening cheers every time a Taipei Assassins player got a kill or even a small advantage, TPA jumped out to an early lead in Game 1. They picked off AZF players right and left, and TPA’s Stanley was terrorizing AZF. All that momentum seemed to make them unstoppable, until they caught AZF going for a dragon and launched a full 5-on-5 teamfight.

In just a moment, the whole game turned on its head. The fight went poorly for TPA, and as they tried to escape, Karthus popped his ultimate and scored a quadra kill. TPA’s gold advantage went down to 2000, and while the match was far from over, TPA never looked dominant again. They lost one teamfight after another, including one a massive one at Baron that AZF won 5 to 3. That put the momentum definitively on AZF’s side, who quickly took an inhibitor and went for a second before retreating. TPA’s respite was momentary: losing badly on gold, and with their back to the wall, they had no choice but to gamble on one last Baron fight. They lost, giving up an ace to AZF, who quickly got the nexus. On the huge displays above the main stage, TPA looked utterly defeated.

They’d been here before, though. They had been beaten savagely my Moscow 5 in their first semifinal game, and had looked every bit as hopeless. If anyone thought AZF was going to steamroll to victory after Game 1, TPA’s strongopening in Game 2 quickly disabused them of that notion.

After getting first blood, TPA got an ace at 14 minutes and a 7000 gold lead, sending up the loudest cheers of the night. From there, they continued to build their lead up for the next ten minutes, opening their gold advantage to nearly 10,000 by 26 minutes. At 32 minutes, TPA went for Baron to bait AZF into a fight, and immediately chased them all the way down the middle lane. They crushed the mid tower, then the inner tower, and pressed it all the way to the inhibitor tower. AZF could not stand and fight,and had to withdraw as their inhibitor fell and their gold deficit grew to 16,000.

From that point, the writing was on the wall for AZF. In a reversal of the last match, they were forced to stake everything on a long-shot Baron fight, lost badly, and TPA cruised to victory to tie the series at 1-1.

They carried all that momentum and energy with them intoGame 3, which swiftly turned into a rout. TPA controlledthe match early by winning a series of small victories that left AZF falling farther and farther behind. From 15 minutes onward, the story for AZF was “close, but not close enough” as they came close to picking up kills… only to watch their target escape as the rest of TPA rallied, usually getting another kill or two.No matter what Frost tried to do, TPA’s Stanley seemed to be lurking nearby, having beaten AZF’s Shy so badly that he had the run of the map. By 22 minutes, TPA had a 10,000 gold advantage and AZF had seen enough. For the first time in the series, they voted to surrender.

The hope of better luck in a new game proved illusory.Game 4 was almost as one-sided. TPA got first blood with a pair of kills, and steadily built from there. Twelve minutes into the match, the overhead monitors showed a grim-faced AZF team across from a composed TPA squad that even managed the occasional smile. 28 minutes in, with kills at 13-4 in favor of TPA and the gold split at 7,000, the game was turning into a siege.

It was a siege AZF were not equipped to win, however. At 32 minutes they managed to get a kill, but the engagement turned right around on them and they gave uptwo kills. That led to a game-winning Baron for TPA, who tore through Frost’s base taking inhibitors and towers, withdrawing only long enough to guarantee a successful attack on a million-dollar nexus.

With the audience cheering and fireworks exploding from the stage, the new world champions stood and began embracing each other. No team could have overcome stronger opponents on its way to the championship, and no team showed the resilience, coolness, and strategic insight that Taipei Assassins did throughout these playoffs. They provedbeyond a doubt that Season 2 had identified the best League of Legends team in the world.