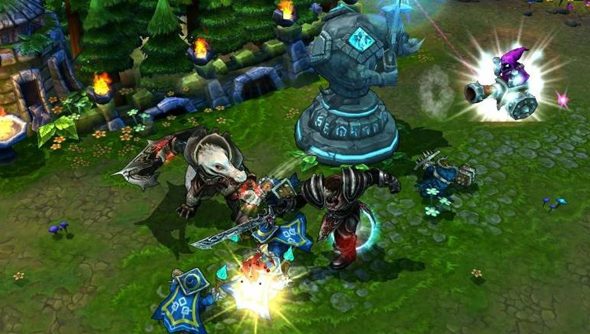 Any honest MOBA player will tell you that League of Legends and Dota 2 are both so technically accomplished as to make no odds – but like any artisanal work, both have distinct flavours. That said, it’s tough for Valve to do anything but follow in Riot Games’ elephant footsteps – they came late to the market, and the forerunner has yet to stumble, let alone fall.

Occasionally, though, Riot turn around and pluck something for themselves from Dota’s basket (using their trunk – they’re still elephants, see). In this case, a chance to directly fund and fly the colours of the pros that drive the game onwards.

The Korean OGN Champions Winter quarter-finals are happening on Christmas Day, if you can believe that, and Riot are selling permanent summoner icons for the participating teams and organisations – including current world champions SK Telecom T1.

“Show your support as the top Korean players charge into the playoffs and stake their claim on the Winter title,” the studio suggest.

When you buy a team icon, 20% of the prices goes directly to that team – and the remaining 80% into a pot for future eSports efforts: namely prizes, salaries, events and streaming. They’re 250 RP each.

Riot aren’t being so selfish in this as they might appear. In August, they told our Rob that the LCS is a “significant investment that we’re not making money from” – but one they have no intention of ever putting a halt to.

Who’re you rooting for this Christmas? Or perhaps you’d forgotten this particular tournament was already into playoffs?